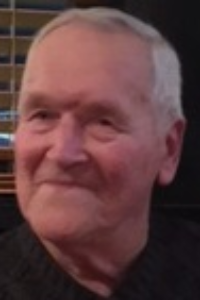 Robert J. Jackson, 84, of Worcester, died Wednesday, May 3rd. His wife of 56 years, Joan F. (Hipp) Jackson, died in 2012. He leaves two sons, Michael J. Jackson and his wife, Bokja "Soo Mi" of South Korea and Philip A. Jackson of Worcester; a daughter, Donna J. Hamalainen and her husband, Charles of Worcester; seven grandchildren, John, James, Michelle, Michael, Sharon, Matthew and Zachary; four great grandchildren, Karsen, Kylie, Ashlynn, and Jayce. He was predeceased by two brothers, Stanley and John Jackson.
He was born in Worcester, the son of John and Hilda (Hollwell) Jackson and was a crane operator and set-up man at Morgan Construction, where he worked for 39 years before retiring in 1995. He was a member of Our Lady of the Angels Parish and the VFW; and a friend of Bill W. He was a United States Army veteran and served in the Korean War. He enjoyed watching sports, especially the New York Giants, and going to the casino, but his favorite times were spent with his family, especially his grandchildren.
His funeral is Saturday, May 6th from O'CONNOR BROTHERS FUNERAL HOME, 592 Park Avenue with his funeral Mass at 9:30 a.m. in Our Lady of the Angels Church, 1222 Main Street. Burial will follow in Worcester County Memorial Park. Calling hours are Friday, May 5th from 4:00 until 7:00 p.m. in the funeral home. In lieu of flowers memorial donations may be made to Our Lady of the Angels Church Building Fund or Project New Hope, 70 James Street, Worcester, MA 01603.