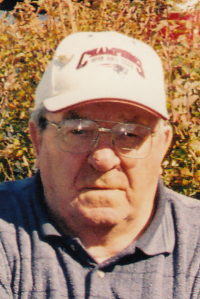 WEBSTER – Francis “Frank” Robertson, 91, formerly of Webster, died Monday, May 1, 2017 in Southbridge Rehab and Healthcare Center after a period of declining health. His wife of 52 years, Theresa (Quinn) Robertson, died in 2012.

He was born on October 22, 1925 in Belfast, Ireland the son of Francis and Mary Jane (Smith) Robertson. Mr. Robertson immigrated to the United States in 1969.

He was a finisher at Anglo Fabrics Company in Webster for many years, retiring in 1989. He was a member of Saint Louis Church and a member of the Friends of the P.A.V. He enjoyed walking his dog and could be seen driving around town on his scooter.

All services will be private and held at the convenience of the family. Donations in his name may be made to Saint Anthony of Padua Parish, 24 Dudley Hill Road, P.O. Box 277, Dudley, MA 01571-0277. Arrangements are under the direction of Scanlon Funeral Service, 38 East Main Street, Webster.