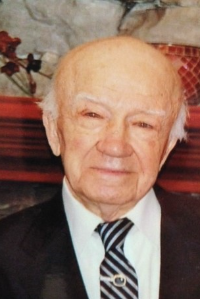 WORCESTER__Chester Joseph Sztukowski, 99, of Worcester died Saturday, April 29, 2017 in UMass Memorial, University Campus. His wife Pauline (Johnson) Sztukowski died in 1976. His daughter-in-law, Ann Marie (Suchocki) Stukowski died in 1985. He is survived by his sons, Paul Stukowski and his wife Kathy and Raymond Stukowski, all of Worcester; two grandchildren, Aimee Stukowski of Malden, and Mark Stukowski and his wife Katie of Holden; two great grandchildren, Adam and Jonathan Stukowski and nieces and nephews. He also leaves his companion and best friend of the past 30 years Nellie Peterson. He is predeceased by his brother Ralph Stukowski and sisters, Charlotte Layko, Dorothy Subloski, Lillian Phillips and Janette Chiras. He was born in Worcester a son of Marcian and Stefanek (Anuskiewicz) Sztukowski.
Mr. Sztukowski retired as a machinist after forty-four years of work with Rex-Nord Company, previously Baldwin-Duckworth company. He attended Barre High School. Chester was a US Army veteran of WWII serving in the Americal Division. He was awarded the purple heart after injuries sustained in _Guadalcanal, Solomon Islands. He was a member of the Homer Wheaton lodge now known as American Legion Post 323; Disabled American Veterans, Polish American Veterans. He also served two terms on the Board of Directors of the White Eagle Club and four years on the board of the Polish Naturalization and Independence Club. Being an avid dancer and lover of live band music, he started Sunday afternoon dances for older couples who enjoyed live music to listen and dance to and which is still being enjoyed to this day. In addition, he was a member of the US Labor Union. He was a member of Our Lady of Czestochowa Church. Mr. Sztukowski will be remembered for his hard work, values and his strong faith. His church was not only his comfort but his second home.
The funeral was held on Thursday, May 4, 2017 from HENRY-DIRSA FUNERAL HOME, 33 Ward St., with a Mass at 11:30 AM in Our Lady of Czestochowa Church. Burial followed in Notre Dame Cemetery. Calling hours in the funeral home were on Thursday, from 10:00 to 11:00 AM. In lieu of flowers, memorial contributions may be made to Our Lady of Czestochowa Church, 34 Ward St., Worcester, MA 01610.