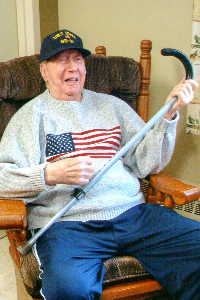 Ed was born and raised in Worcester, a son of the late James and Josephine (Shannahan) Coffey, both recent Irish immigrants to the area. He graduated from Commerce High School and soon after, as many of his fellow classmates had, he joined the Armed Forces during World War II. He proudly served the US Navy in the Pacific Theater aboard the USS Iowa and later was recalled to serve again during the Korean War aboard the USS Worcester. Ed was always proud to show family and friends the bell of the USS Worcester as it is prominently displayed in the foyer the Worcester City Hall. He worked for many years as a stationary engineer for the former New York-New Haven Hartford Railroad before retiring. He was a life member of the Joseph J. Michna VFW Post in East Douglas, a longtime member of the former Main South American Legion Post and a former member of the Worcester Lodge of Elks. A faith filled life was also important to Ed. He was a member of the former St. Charles of Boromeo Parish in Worcester before its closing and later became a member of St. Peter’s Parish.

Ed was predeceased by his beloved wife, Mary P. (Fisher) Coffey who died in 2009. He was also predeceased by his only son, Neil Coffey, his two brothers, James and John Coffey and his sister, Christine Morrow. He leaves his granddaughter, Jill as well as many nieces, nephews, grand and great grand nieces and grand and great grand nephews, including Jeffrey and Judith Coffey of Worcester, who having lovingly cared for Ed over the past several years.

Relatives and friends are invited to attend a visiting hour on Wednesday, May 3, from 9:30 – 10:30 a.m. at the CALLAHAN, FAY and CASWELL FUNERAL HOME, 61 Myrtle Street, Worcester to be followed by the celebration of a Mass of Christian Burial at 11:00 a.m. at the Church of St. Peter, 931 Main Street, Worcester. Burial with military honors will be in Worcester County Memorial Park, Paxton. To share an online condolence for the family, please sign the guestbook on this page.