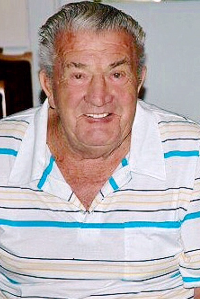 He was born in Dudley, a son of John and Victoria (Bilski) Androlewicz and was a lifelong resident. He attended Cole Trade High School in Southbridge.

He was a Coast Guard veteran of World War II.

Mr. Androlewicz was the proprietor of New England Landscaping Company. He was also a co-owner of Treasure Island Restaurant from 1964 to 1972.

He was a member of Saint Joseph Basilica in Webster. He belonged to the Webster Lions Club and to the Toastmasters Club. He loved golf and he was a member of the Thompson Raceway Golf Club and of Nichols College Golf Course.

A funeral service will be held at 11:00 AM Wednesday, May 3, in the Sitkowski & Malboeuf Funeral Home, 340 School St.,Webster. Visitation will be from 9:00 to 11:00 Wednesday prior to the service. The Webster-Dudley Veterans Council will perform military honors after the service. Burial will be private. A memorial Mass will be held at Saint Joseph Basilica at a later date. Donations in his name may be made to Saint Joseph Gymnasium Fund, 53 Whitcomb Street, Webster, MA 01570.