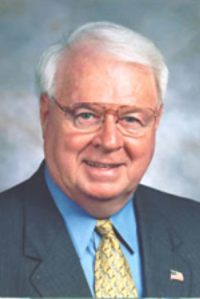 John (Jack) Healy, beloved husband of Hilda Healy for over 60 years, cherished father to John, Robert, Mary and Joseph, passed away on Saturday April 29, 2017 under the exceptional care of the nurses and doctors of St. Vincent Hospital in Worcester, MA.
Known as the "voice of manufacturing" in Massachusetts, Jack advised many Governors, Senators and Congressmen on the subject. He was an advocate for small and medium sized manufacturers working with private, public and government organizations with the goal of strengthening the manufacturing sector in Massachusetts through advances in workforce education and policy development.
For the last 20 years, Jack was the founding Executive Director of the Massachusetts Manufacturing Extension Partnership (MassMEP) where he served in that role until retiring in August of 2016. Additionally, Jack served as President of Presmet Corp. when the company was recognized by the automotive industry with 17 quality certifications including the prestigious Ford Q1 Award and was Senior Vice President and cofounder for the U.S. Division of LEGO, a world-class toy company where he established and ran their domestic manufacturing operations. He was an Air Force veteran, with a specialty in Survival Training.
An active advisor throughout his life to both industry and civic organizations, Jack most notably served on the following boards: The Providence and Worcester Railroad Company, Seven Hills Foundation, the Emerald Club of Worcester and Becker College.
Originally born and raised in New York City with his brother Donald and sister’s Marguerite and Cathleen, he lived in Auburn for nearly 45 years and most recently had moved with Hilda to their vacation home in Charlton. Jack was also an avid member of the Irish community in Worcester County supporting multiple Celtic related causes and events.
Additionally, Jack leaves behind his son-in-law, Dr. Mark Watkins and endearing daughters-in-law Grace, Paula and Amy. He will be terribly missed by all of his grandchildren: Kelly, Erin, Patrick, Riley (John Riley), Maggie (Margaret), Sean, Stephen, Tyler and especially by his oldest grandchild Matthew, his wife Meghan and their two children (Jack’s great grandchildren) Emma and Norah.
Calling hours will be on Wednesday, May 3rd from 4:00 PM until 7:00 PM in O'CONNOR BROTHERS FUNERAL HOME, 592 Park Avenue, Worcester. His funeral will be held Thursday, May 4th, with a Mass at 10 AM in Our Lady of the Angels Church, 1222 Main Street, Worcester. In lieu of flowers the family has asked remembrance donations be made in Jack’s name to the Seven Hills Foundation, 81 Hope Avenue, Worcester, MA 01603 or to the St. John’s High School Annual Fund, 378 Main Street, Shrewsbury, MA 01545.