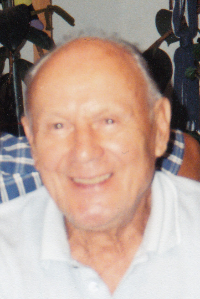 WEBSTER – Tom Baxter passed away peacefully on April 29, 2017 at the age of 97. He was born Thomas Buchka on January 31, 1920 in Yantic, CT, the son of Stathis and Stella Buchka and lived in Webster most of his life. He is survived by his wife of 70 years, Mary (Pappas) Baxter and by his son Robert Baxter of Lake George, NY.

Tom was a World War II Navy veteran and a survivor of the Pearl Harbor attack of December 7, 1941. He served in the Pacific Theatre for 6 years, earning seven battle stars and was honorably discharged at the end of the war.

He came home and married Mary Pappas of Webster in 1946. They had 2 sons, Thomas S., Jr. and Robert. Tom changed the family name from Buchka to Baxter in 1958.

In 1960, he opened the Top Hat nightclub and ran that business until 1981 when he retired.
Tom’s main passion in life besides family and business was golf. He played every chance he could, up until 95 years of age.

Besides his wife and son, he is survived by his daughter-in-law Lucy, by his grandson William Whitcomb and his wife Victoria, and by 2 great-grandsons, Joseph and Patrick. Also surviving are 2 sisters, Hazel Buchka of Webster and Dorothy Sosnowski of Dudley, his cousin Yarno Nesta of Oxford and his nephew Bill Buchka, Jr. from the Cape.

His older son “Butch” predeceased him in 1984 as did 5 sisters and 4 brothers.

At Tom’s request, his body was donated to Harvard Medical School. There will be no calling hours. In lieu of flowers, donations can be made to Sts. Constantine & Helen Greek Orthodox Church, PO Box 713, Webster, MA 01570. The family wishes to thank Central Mass. Hospice, VNA of S. Worcester County and Tri-Valley for all their assistance. Arrangements are under the direction of Sitkowski & Malboeuf Funeral Home, 340 School Street.