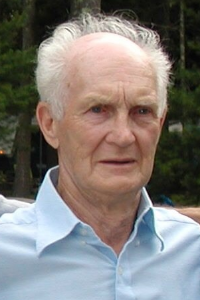 APPLETON ME. / OXFORD MA. – Lloyd Elston Leigher, 86, of Appleton, passed away peacefully at Quarry Hill in Camden, ME. on April 24, 2017. Lloyd was born in Appleton, ME, on May 6, 1930, to Carolyn (Fish) and Aubert Leigher. Lloyd lived in Appleton before moving to Massachusetts in 1950. He was a boiler man for many years at the Ware Industry Complex in Ware MA. He served as Scoutmaster for BSA Troop 125 in Rochdale. His youngest son now holds this position and carries on his legacy. Lloyd was known as an honorable and resourceful man. When he moved back to Appleton in the early 80’s he milled the lumber from his own trees and built a two story home. He also was an avid gardener who categorized his crops from year to year to improve the yield of his hard work. Lloyd leaves behind his daughters Robin Bittner and her husband Jack of Kingman, AZ., Muriel Locke and her husband William of Spencer, MA. His sons, Randall Leigher and his wife Debra of Charlton, MA. Sheldon Leigher, Kirk Leigher and his wife Lynn of Oxford, MA. Grandchildren Jason Bittner of Salem OR, Ryan Leigher and his wife Meagan of Franklin, MA., Candice Leigher of Southbridge, MA., Danielle Knox and her husband James of Charlton, MA., Benjamin Locke and his wife Jessica, Christopher Locke, all of Spencer, MA, Kristen Outler and her husband Anthony of Newark, NJ, Kelsey Leigher of Oxford, MA Rebecca Laramee and her husband David of Oxford, MA John Calley of Oxford, MA. Jeremy Calley of Webster, MA. And great grandchildren Aronna, Colton, Weston, Ross, Luke, Brittney, Zachary, Linda, Nicolas, and Avery. He is survived by a brother Bernard and wife Maxine of South Carolina and a sister Rhodena Sullivan of Waldo, ME and many nieces and nephews. He was predeceased by his first wife of 27 years Jean Macintyre and his second wife of 25 years Laura Bemis, a son Wayne Leigher, grandsons Jonathan and Jacob Bittner, daughter–in–law Bonnie Leigher, sister Muriel Knowlton, and brothers Frank and Richard Leigher.

Calling hours will be held on Wednesday, May 3, at Morin’s Funeral Home 1131 Main Street Leicester. from 5:00 – 7:00 PM Burial will be held at Pine Grove Cemetery in Appleton at a later date. In lieu of flowers donations in his memory can be made to Shriner’s Hospital for Children 516 Carew Street, Springfield, MA. 01104 or Troop 125 BSA 7 Forest Street Leicester Ma. 01524.