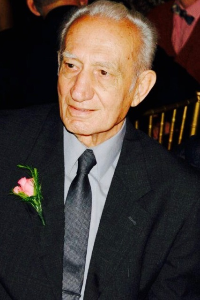 Worcester-Stefanaq Tollkuci, 90, passed away on Thursday, April 13th at home surrounded by family.

Stefanaq was an accomplished Economist and Head of Finance for the Foreign Commerce Department for the Government of Albania. He was a member of Saint Mary’s Assumption Albanian Orthodox Church.

The Funeral Service will be held on Tuesday, April 18th at 11AM at Saint Mary’s Assumption Albanian Orthodox Church, 535 Salisbury Street. Burial will be at Hope Cemetery. Visiting Hours are Monday, April 17th from 5PM to 8PM at the Callahan Fay Caswell Funeral Home, 61 Myrtle Street. In lieu of flowers, memorial donations may be made to Stefanaq’s church where the proceeds will be used to help support this year's Albanian Festival, an event he so loved to attend