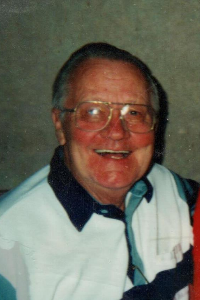 Auburn – Harold Johnson Jr., 91, of Auburn, passed away on Tuesday, April 11 in Care One at Millbury Nursing Home surrounded by his family.
Harry was married for 59 years to his late wife, Betty J. (Hobson) Johnson who died in 2007. He is survived by a son, William H. Johnson of Worcester; three daughters, Susan E. Millett and her husband Daniel of Worcester, Nancy E. Naoum and her husband Steven of Worcester and Lynda J. Rogers of Auburn, with whom Harry lived with for many years. He also leaves behind, 5 grandchildren, Jodie, Sandra, Todd, Matthew and Lyndsey; 10 great grandchildren, Anjelica, Benjamin, Joshua, Alyssa, Summar, Kyle, Krista, Logan, Camden and McKenzie and a niece, Judy Bonci.
Mr. Johnson was born in Worcester, son of the late Harold Johnson Sr. and Mary (Sweeney) Johnson and is also predeceased by a brother Robert Johnson. Harry is a World War II veteran serving in the United States Navy.
Harry worked for over 42 years as a machine operator at G.E. Telechron and retired in 1990. Mr. Johnson then went to work at the Worcester Centrum, now the DCU Center as security personnel and for the Alfred Roy & Sons Funeral Home as a funeral attendant.
He was a former member of the Worcester Lodge of Elks #243 where he served as the Exalted Ruler and Lodge Secretary and was currently a member of the Auburn/Webster Lodge of Elks #2118. Harry also belonged to the former Main South American Legion Post #341 and the Moose Lodge in Marlboro.
A funeral service will be held on Friday, April 14 at 11:30 AM in the Alfred Roy & Sons Funeral Home 12 Hammond St. Worcester. Burial will follow in Hope Cemetery, Worcester. Calling hours will be held on Thursday, April 13 from 5 to 8 PM in the funeral home. Members from the Worcester and Auburn/Webster Lodge of Elks will gather and perform a ritual at 6PM during calling hours. Memorial contributions in memory of Harry may be made to Auburn/Webster Lodge of Elks Scholarship Fund 754 Southbridge Street Auburn, MA 01501.
To share a memory of Harry, sign the online guestbook, or for directions please visit www.Royfuneral.com