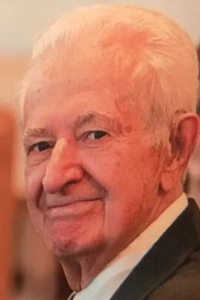 Evangelos "Angelo" Stratis, 89, of Worcester, an immigrant from northern Greece who led the way for many of his compatriots to open pizza restaurants throughout New England, died Sunday night following complications from heart surgery at U-Mass Medical Center, with his loving family by his side. He is survived by his wife of 63 years, Alexandra (Gatzoyiannis); his sons, Nicholas Stratis and Andrew Stratis and his wife, Shanan all of Worcester; and six grandchildren, Evan, Alexis, Kyle, Thomas, Sydney and Drew; his brother-in-law Nicholas Gage and his wife, Joan of Grafton; his sisters-in-law Olga Bartzokis of Needham and Fotini Haithis of Clinton, and more than a score nephews and nieces. He was predeceased by his sister Xanthoula Tsantinis.

Mr. Stratis, known as Angelo, was born in the village of Lia in the Epiros province of northwestern Greece, made famous by the book “Eleni,” written by his brother-in-law Nicholas Gage (Gatzoyiannis). Angelo was the only son of Nikolaos and Ourania (Tsironi) Stratis. He came to Worcester in 1954 after marrying Mr. Gage’s sister, Alexandra. In another memoir, “A Place for Us,” Mr. Gage recounts how Alexandra on a visit to relatives back in the village, met Angelo, recently released from his service in the Greek army, and watching as he patiently disassembled a broken radio and put it back in working order, she decided he had the patience and perseverance to make it America. They married a few weeks later.

On his arrival in America, Angelo worked for several years in factories and restaurants in Worcester County. Then in 1963, long before food trucks became popular, he and a partner converted an old school bus into a traveling pizza restaurant and sold their products outside dormitories at Boston University. Two years later he left the food truck to his partner and opened Angelo’s House of Pizza at 579 Moody Street in Waltham, where over the next 20 years he became a beloved figure in the city because he treated everyone who walked into his store with warmth, kindness and courtesy. While operating Angelos’s, he opened a second restaurant, Anna’s Pizza, on Main Street in Waltham with his brother-in-law, Theofanis Tsantinis, as a partner. Over the next two decades many relatives and fellow villagers from Lia worked at both stores. When they learned the business and saved some money, Angelo helped them open their own pizza restaurants in more than a dozen cities and towns throughout New England.

In 1983 he sold his interest in the restaurants to spend more time with his family, but after a brief retirement, he opened new restaurant, Mendon House of Pizza, next to his son Nicholas's thriving liquor store in Mendon, MA and operated it for several years before retiring.
During his retirement, Angelo continued to help his sons in their various businesses, made several trips back to Greece with his wife, and participated in family gatherings with many of the relatives he sponsored to come to the United States. Known for his kindness, tolerance, and gentle humor, he will be missed by everyone who had the good fortune to share any part of his life.

Angelo was a lifetime member of St. Spyridon Greek Orthodox Cathedral, the Panepirotic Federation of America, and Society Lioton, an organization of natives of his village Lia, which he helped found 50 years ago and served as president on two occasions.
Calling hours are Wednesday, April 5th in O’CONNOR BROTHERS FUNERAL HOME, 592 Park Avenue, Worcester, are from 5:00 p.m. until 8:00 p.m. In lieu of flowers, contributions may be made to St. Spyridon Greek Orthodox Cathedral, 102 Russell Street, Worcester, where the funeral will be held at 11:00 a.m. on Thursday, April 6th. Burial will follow at Hope Cemetery.