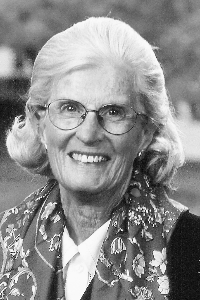 Better known as "Sid," she was a life-long resident of Worcester who dedicated her life to making her City a better place to live. A graduate of Newton Country Day School and Manhattanville College, Sid began her career as a journalist at the Worcester Telegram & Gazette eventually having her own column. It was at the T&G that she met her future husband Frank Callahan. Frank worked for his family business, Callahan Brothers Funeral Home and he would hand deliver the obituaries to the newspaper. Sid once proclaimed "I HAD to marry Frank otherwise he'd still be hanging around my desk at the T&G." They went on to be happily married for 58 years.

Sid took a hiatus from the professional world in order to raise her family but that didn't stop her from becoming a volunteer extraordinaire. She became the first woman President of the Members Council of the Worcester Art Museum, was a Board Member of the League of Women Voters and volunteered for 26 years in raising funds for United Way then known as the Community Chest. She was also a PTA President and Brownie leader when her children were young. Eventually she Chaired the Worcester Bicentennial Commission and was very involved in the restoration of Mechanics Hall.

When Sid served on Boards she didn't just attend monthly meetings -she got involved! She organized Balls and Fairs, hired Directors, ran Capital Campaigns, helped restructure and relocate Institutions. She served on the Board of the Friends of the Worcester Public Library and was appointed by the City Manager on various Commissions including the Historic Commission and GAR Hall. She was an elected member of the American Antiquarian Society. She served as a Corporator of Children's Friend Society, Mechanics Hall Association, Higgins Armory Museum, Abby's House, Green Hill Park Coalition, YWCA and was on the Board of the Worcester Garden Club and President of Preservation Worcester. Sid was influential in the transition of the Worcester Horticultural Society to the Tower Hill Botanic Garden in Boylston where she served on the Board for many years and served as its President and later as an Honorary Trustee.
After getting a Masters Degree in Library Science she became the Development Director for the American Antiquarian Society eventually starting her own fundraising firm soliciting funds for many of the City's non- profits. She continued to use her writing skills in the many grants she wrote for local institutions. Additionally, Sid wrote the brochure used by Tower Hill which documents their sculptures and garden ornaments. She was also the driving force behind the recently published book "Living at the City's Green Edge~ Bancroft Heights: A Planned Neighborhood in Worcester, Massachusetts" which depicts her beloved Massachusetts Avenue neighborhood. Sid was instrumental in getting this beautiful Worcester area declared a National Historic Landmark.

Throughout the years she has received many awards and commendations for her dedication to the City. She was a proud citizen and civic leader. A friend recently described her as an institution of dignity, fierceness and elegance.

Sid was the granddaughter of Dennis Crowley founder of the Polar Beverage Corporation in 1882 and the niece of David I. Walsh who in 1914 became the first Irish Catholic Governor of Massachusetts later a United States Senator. She was predeceased in 2005 by her husband Frank, her parents Edward Crowley and Kathleen Donnelly Crowley also her brothers Denis, Edward, Ralph and James and sisters Kathleen McKellar and Carol Hanlon. She was also predeceased by her daughter Sarah Louise who died in 1953.

A Funeral will be held on Thursday, April 6 from CALLAHAN, FAY & CASWELL Funeral Home, 61 Myrtle Street, with a Mass at 11AM in the Cathedral of Saint Paul, 15 Chatham Street. Burial will be private in Saint John's Cemetery. Worcester. Visiting Hours are Wednesday, April 5 from 4 to 7PM in the funeral home. Sid's charities were many but contributions in lieu of flowers may be made to Abby's House in care of her friend Annette Rafferty or to the Greater Worcester Land Trust.