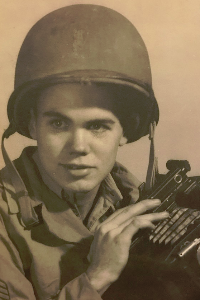 Worcester : H. Randolph "Randy" Swanberg, Jr. 93, passed away on Friday, March 31, 2017 in St. Francis Rehabilitation and Nursing Center. He leaves a daughter, Karen Dunham of Ashby; two sons, Gary Swanberg and Brad Swanberg, both of Worcester; and two grandchildren, Jeffrey Senecal, Jr. and Connor Dunham. His wife, Mary Jane Swanberg predeceased him in 1996. He was predeceased by a brother Melvin Swanberg in 2001.

Randy was born in Worcester, son of the late Harry R. Swanberg, Sr. and Olga J. (Ahlquist) Swanberg. He graduated from North High School in 1942 and proudly served his country in the Army-Air Force during WWII. He worked as a commercial photographer for E.B. Luce Co. in Worcester for many years. He was an avid fly fisherman and fly tyer and was a long-time member of the New England Fly Tyers.

CALLING HOURS WILL BE HELD ON MONDAY, JULY 31, 2017 FROM 10-11 a.m. in Nordgren Funeral Home 300 Lincoln St. Worcester. A MEMORIAL SERVICE WILL FOLLOW AT 11:00 a.m. in the funeral home. BURIAL OF ASHES WILL FOLLOW IN WORCESTER COUNTY MEMORIAL PARK, PAXTON. In lieu of flowers, donations in Randy's memory may be made to: The Friendship Network for Children, 300 West Main St. #C-4, Northborough, MA 01532.