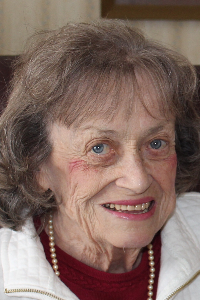 
Maureen A. (O'Leary) Boyle, 80, of Auburn, passed away Saturday, April 1st in St. Vincent Hospital after a lengthy illness. She leaves her husband of 57 years, Daniel J. Boyle; four sons, Michael P. Boyle and his wife Lynn of Uxbridge, Kevin F. Boyle and his wife Beth of Grafton, Brian D. Boyle and his wife Roberta of Glastonbury, CT, and Timothy C. Boyle and his wife Diane of Danvers; two brothers, Leonard O'Leary of Mashpee and Francis O'Leary of FL; ten grandchildren, Michael, Brittany, Matthew, Griffin, Cameron, Austin, Sean, Jason, Ryan, and Brendan Boyle; a great grandson, Michael Boyle; several nephews and nieces. She was predeceased by her sister, Patricia Taylor.
She was born in Worcester, the daughter of Francis and Margaret (Leonard) O'Leary and graduated from South High School and Katherine Gibbs Secretarial School in Boston. She worked for Francis Harvey Engineering Firm and later became the executive secretary for Mayor James D. O'Brien of Worcester. After leaving the Mayor's office, she worked for several years as a clerk at the Worcester Postal Credit Union.
Maureen was a lifelong member of St. Peter's Parish, Worcester and she was also a member of the Ancient Order of Hibernians, and the Women's Guild of Our Lady of Providence. She enjoyed spending time with her family and friends.
Her family would like to extend their heartfelt thanks to the staff at St. Vincent Hospital, in particular, the Renal Division and Dialysis Unit for their care over the years.
Relatives and friends may visit with Mrs. Boyle's family Tuesday, April 4th from 4:00 until 7:00 P.M. in O'CONNOR BROTHERS FUNERAL HOME, 592 Park Avenue, Worcester. Her funeral will be held Wednesday, April 5th with a Mass at 10:00 A.M. in St. Peter's Church, 931 Main Street, Worcester. Please meet directly at Church. Burial will follow in St. John's Cemetery, Worcester. In lieu of flowers, donations in her memory may be made to St. Jude Children's Research Hospital, 501 St. Jude Place, Memphis, TN, 38105.