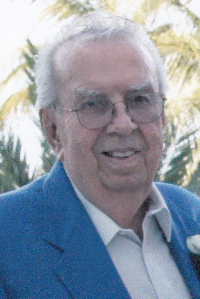 He was born on December 26, 1925 in Webster, MA, the son of Albert and Juliana (Andrzejewska) Biadasz. He lived in Dudley, MA, and Danbury, CT before moving to Florida in 1986.

Walter was a US Coast Guard veteran of World War II. He served in the Asiatic-:Pacific Theatre on the attack cargo ship USS Sterope AK 96 and saw action in the landings at Guam and Okinawa. He was later transferred to the destroyer escort USS Ramsden DE 382, which protected larger ships in the China Seas. He was discharged as a petty officer, 2nd class.

After the war, Mr. Biadasz was employed by the Waterhouse Furniture Factory in Dudley, MA. When it was acquired by Ethan Allen, Inc., he was promoted to plant manager at the Dudley facility. He then moved to Danbury, CT in 1970 when he was appointed to the Ethan Allen Inc. Board of Directors and Vice President of Manufacturing for Ethan Allen Furniture.

Retiring in 1986, he and Esther moved to Hobe Sound where they enjoyed a social and golf life at Heritage Ridge Country Club. After her death in 2006, Walter moved to Vero Beach, where he resided next door to his loving daughter, Linda.

Walter loved people and life and will long be remembered as “Gramp “by his grandsons and great-grandchildren, all of whom he adored. He was dedicated to learning his family’s history and genealogy: he travelled to Poland numerous times to search for family members. A great joy in his later years was reaching out to family members as the editor of the Biadasz family newsletter.

He was greatly loved by family and friends and will be dearly missed.

The funeral will be held on Saturday, April 8, from the Sitkowski & Malboeuf Funeral Home, 340 School Street, Webster , MA with a Mass at 10:00 AM in Saint Joseph Basilica, 53 Whitcomb St., Webster. Burial will be in Saint Joseph Garden of Peace, with the Webster-Dudley Veterans Council providing the military honors. Vistation will be held from 8:45 to 9:30 AM Saturday, April 8, in the funeral home. Donations in his name may be made to St. Joseph School Immediate Needs Fund, 53 Whitcomb St., Webster, MA 01570.