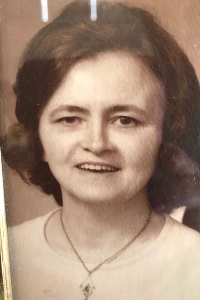 Ruth Thomas Helie, 94, formerly of Worcester, MA, passed away peacefully on Wednesday, March 22, 2017 at the Armenian Nursing Home, Jamaica Plain. She was predeceased by her husband of 56 years, Wallace I. Helie.

Ruth arrived in Worcester as a young war bride to join her US Army veteran husband in 1946. Born in the small village of Llandissilio, Pembrokeshire, South Wales she became a nursing student in Wincanton, England -- treating victims of the Battle of Dunkirk and protecting patients from nightly bombings -- where she met Wally at an Army-sponsored dance. They enjoyed a long and happy life together.

Ruth leaves a devoted family: daughter, Gwyneth Helie of Jamaica Plain; Colin Helie and his wife, Julie Weston of Valley Falls, NY; James Helie and his wife, Deborah Oxman Helie of Watertown, MA; granddaughter Jessica Helie and her son, Aidan of Sandown, NH; grandsons Jackson and Ethan Helie of Watertown, MA; stepson Jack Helie and his wife, Dorothy, of Exeter, NH; step-grandchildren Susan Rose of Strafford, NH and John Helie of Anchorage, AK; along with their children -- Evan, Justin, Rosemary, and Kyle who she loved as her own. Ruth kept in close touch with her family in Wales: treasured sister-in-law Elizabeth Thomas, niece Moira Connell, nephews Matthew Thomas and Richard Mathias. She was predeceased by a sister, Mona Thomas Mathias and a brother, Robert Thomas.

During her thirty years of providing nursing care to patients at The Lutheran Home in Worcester she made many loyal friends, as well as the ten years while living at Colony IV Retirement Home. She will be remembered for always offering a cup of tea to anyone who stepped through her door -- true to her British heritage.

The Helie family would like to extend to the staff of the Armenian Home our gratitude for the loving, tender care given to our mother during her two-and-a-half year stay. It was beyond the call of duty and very much appreciated.

A service is planned at the Fay Brothers Funeral Home in West Boylston for Saturday, April 22, 2017 at 11 AM. A visiting hour will take place at 10 AM.

The family requests that in lieu of flowers, a donation may be made to the American Red Cross.