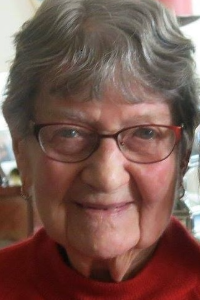 
Gladys B. (Dellana) Gorski, age 95, passed away peacefully on Thursday, March 23, 2017 at Lanessa Extended Care in Webster following a short illness.
She was born in Wilsonville, CT. daughter to the late Julia (Pizzotti) and Frank Dellana and was the widow of Attorney Joseph F. ‘Dan’ Gorski, Jr. who predeceased her in 1997 after 54 years of marriage.
She was a 1938 graduate of the former St. Louis High School and Becker Junior College, graduating in 1939. She worked as an executive secretary and administrative assistant for many years in various firms in the Webster area.
Gladys leaves behind her son, Joseph F. ‘Danny’ Gorski, III and his wife Betsy of Wellfleet, grandson, Nicholas Gorski and his wife Emily Mitchell of Ridgewood ,N.Y., grand-daughter, Alexandra Gorski and her partner Mick Castellano of New Rochelle, N.Y. She is also survived by dear sister-in-law, Reine Gorski of Webster and numerous nieces and nephews, great nieces and great nephews. Her Gordon and Ronan “relatives by marriage” in New Rochelle mourn her loss as well. In addition to her husband, she was predeceased by a son Frank, who died in infancy, as well as her brother George Dellana and his wife Mary, brothers-in-law, Edward, John and Thomas Gorski; beloved sister-in-law Celia Gorski Brisbois and brother-in-law Levi Brisbois.
While many individuals, both family and friends, aided and watched over her in the last year, special thanks must go to close friend Margaret S. Lorenczykova, nephew George Dellana and his wife Aileen, and niece Julie Dell’Anna-all whom went above and beyond to rally to her side particularly during the last six months.
The family is also grateful for the compassionate care that she received at Lanessa Extended Care during the last week of her life and to Tri-Valley, Inc. for the preceding months of in-home services.
After her family and her God, Gladys loved ballroom dancing, spending time on Cape Cod and a good martini. She was a life-long member of the Webster Emblem Club#129, served many roles including several stints as President. She was a member of the Polish American Veterans, serving as Historian. She served on the Finance Committee in Webster and was also an election worker for many years.
Before her arthritic hands made it impossible, she was a great seamstress, knitter and quilter.
Visiting Hours will be Sunday, March 26, 2017 from 3-6PM at the ROBERT J.MILLER FUNERAL HOME and LAKE CHAPEL, 366 School Street,
A Funeral Mass for Gladys will be Monday, March 27, 2017 at 10AM at St. Louis Church, 14 Lake Street in Webster. Burial will follow at Calvary Cemetery in Dudley next to her beloved husband Dan.
In lieu of flowers, donations may be made in Gladys memory to: the Friends of the Chester C. Corbin Library www,corbinlibrary.org.
An On Line Guest Book or to Share a Memory of Gladys, please visit: RJMillerfunerals.net
“A Special Lady and Friend will be Greatly Missed “