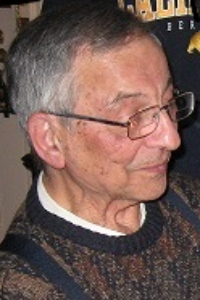 Samuel George, 84, passed away Wednesday, March 22, 2017, at Health Alliance Hospital in Leominster. Samuel was born in Worcester, son of Kosta and Georgia (Beri) George. He was a U.S. Army veteran of the Korean War. He was a graduate of Worcester Boys Trade School (1950) and was a mechanical engineer at Morgan Construction and Raytheon. He lived in Worcester for most of his life, until moving to Fitchburg. He was preceded in death by his wife of 41 years, Theodora H. (Soter) George and infant son, Charlton. He was also predeceased by a brother, Tom George, and sister, Elizabeth Vangel. He leaves several nieces and nephews.

Funeral services will be held Monday, March 27, 2017, at Saint Mary's Assumption Albanian Orthodox Church, 535 Salisbury Street, Worcester. A calling period will be held from 1-1:30 pm immediately followed by the service at 1:30 pm. Burial with Military Honors will be in Hope Cemetery. In lieu of flowers, memorial donations may be made to the church.