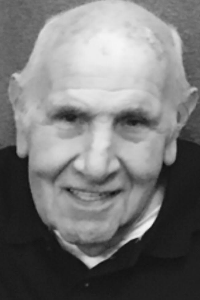 He leaves his beloved wife of 63 years, Elizabeth A. (McCluskey) Gregoriou, five children Kathy A. Derderian and her husband Cliff of Boylston, James A. Gregoriou and his wife Jane of Hubbardston, Lynda L. Jarrett of Framingham, Karen M. Kent and her husband William of Charlton, and Michelle L. Cox and her husband Sean of Charlton, with whom they lived the past 15 years. He also leaves 12 grandchildren, who were a source of great pride for him; Marissa, Leah and Andrea Derderian, Jennifer and Jillian Gregoriou, Lindsey and Erin Jarrett, Christopher and Vanessa Kent, Bennett, Cameron and Samantha Cox. He also leaves his brother in law; Richard McCluskey, his sister in laws; Patricia Larsen, Rose McCluskey and Margaret McCluskey; and many nieces and nephews.

Born in Worcester, he was the son of Demetrius and Efterpe Gregoriou and brother of the late Father George Gregory. Tony owned and operated C&T Fruit Produce in Worcester for 23 years before retiring in 2000. Prior to this, he was a Division Sales Manager for Table Talk Pies in Worcester. If you had the honor of knowing Tony you knew he was a gentle, kind, loving man who revered his wife and family. Through the years, he enjoyed coaching Westborough Little League and American Legion baseball teams. He was an amazing father, grandfather, and cheerleader. Above all he was a loving husband, who spent his time telling all who would listen how beautiful his wife was. Their love was one for the ages. The family would like to extend a very special thank you to the staff at Life Care in Auburn Ma. Our deepest appreciation for the outstanding care you provided him.