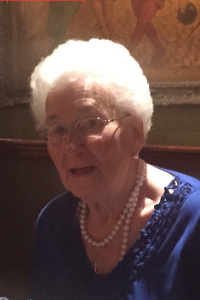 Irene L. (Zylinski) Recko, 91, of Worcester, died peacefully on Saturday March 11, 2017 with family by her side in UMASS-Memorial Medical Center, 55 Lake Ave North. Her husband of 52 years, John J. Recko, Jr. died in 1999.
She leaves a son, John J. Recko, III and his wife Marcia of Oakham; a daughter, Patricia A. Kalinowski of Rutland; four grandchildren, Adam Kalinowski, Joseph Kalinowski, Jessica Recko and Jennifer Dennison, five great-grandchildren and several nieces and nephews. She was predeceased by three brothers and three sisters. Irene was born in Edwardsville, PA., a daughter of Lucian and Josephine (Wisniewski) Zylinski and has lived in Worcester for most of her life.
Mrs. Recko was a dye cutter for several years for Johnson Steel & Wire Co. She also worked as a stitcher many years ago for the former Jewell Uniform Co. Irene was a member of Our Lady of Czestochowa Church and the PNI Women’s Club. Irene enjoyed the many friendships she created while living at Ascension Village.
The funeral will be held on Friday March 17, 2017 from HENRY-DIRSA FUNERAL HOME, 33 Ward Street, with a Mass at 10:30 A.M. in Our Lady of Czestochowa Church, 34 Ward Street. Burial will follow in Worcester County Memorial Park, Paxton. Calling hours in the funeral home are Thursday March 16, 2017 from 5:00 to 8:00 P.M.