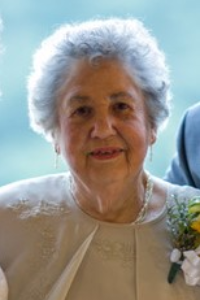 Margaret "Peg" R. (Graham) McMillen, 92, passed away on Friday, March 10, 2017. She was a resident at the Willows in Worcester. Her husband of 50 years, George H. McMillen predeceased her. She leaves a son, George McMillen of Worcester; two daughters- Leah Dewey of NC; and Carol Edwards of VA; six grandchildren; eight great-grandchildren; a sister, Mary Lee Leary of VA; three nieces; and many grandnieces and grandnephews. She was predeceased by two sisters, Mariel Connell and Thelma Picard; and a grandson, Bobby Edwards.

Peg was born in Pittsburgh, PA, daughter of the late Edwin and Matilda (Schultz) Graham, and graduated from Langley High School. After moving to Worcester, she was a member of Wesley United Methodist Church and First Presbyterian Church. She was a member of the Outdoor Sports Club of Worcester for 50 years. She served as a volunteer for many years in the Hahnemann Hospital Auxiliary.

A memorial service will be held on Sunday, March 26, 2017, at 2pm at First Presbyterian Church, 125 Holden St., Worcester, followed by a reception. Burial was in The Chartiers Cemetery in Pittsburg, PA. In lieu of flowers, donations may be made to Autism Society of Northern Virginia (ASNV), 10467 White Granite Drive #324, Oakton, VA 22124 www.ASNV.org in memory of Margaret McMillen and Bobby Edwards.