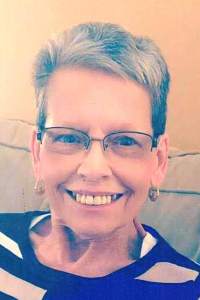 WORCESTER-Suellen (Walsh) Lamothe, 64, of Worcester, died Friday, March 10, 2017 at home surrounded by her loving family, after battling a long illness with COPD.

She leaves two children, Gavin J. Lamothe of W. Boylston and Seana J. Lamothe of Leeds, MA, her beautiful granddaughter, Aislinn; three sisters, Patricia A. Walsh and her husband Ron Hewett of Worcester, Justine M. Walsh with whom she lived, Francine H. Ryan and her husband Paul of Northborough, and a brother Michael A. Brennan and his wife Cheryl of Worcester. She also leaves nephews, nieces and great nieces, several aunts, uncles and cousins, and her former husband, Wilfred Lamothe. Suellen was predeceased by her parents John P. Walsh and Justine M. (Shea) Walsh-Brennan, her stepfather Joseph M. Brennan, a brother John P. “Jackie” Walsh and a sister Rosemary T. Walsh.

Suellen was born in Worcester and graduated from Holy Name CCHS and Worcester City Hospital School of Nursing, where she worked as an RN for several years. She then worked for the Elderly Outreach Program through Worcester City Hospital until it’s closing, then at Saint Vincent Hospital. Most recently, Suellen worked at Neuro Rehabilitation Center until retiring due to her illness. Suellen was a loving mother, sister, and daughter, who spent her life helping others and caring for her family. She loved to bake, play Scrabble, and Yahtzee, complete crossword puzzles, watch sports, and supported her children in their education and wholeheartedly encouraged their interests. She was so very loved.

Suellen’s family would like to thank the Jewish Healthcare Hospice team for the wonderful care they provided. Special thanks to her nurse Marjorie, and caretaker Sister Jane, for their outstanding and constant care and thoughtfulness.

The funeral will be held Tuesday, March 14 from CALLAHAN FAY & CASWELL Funeral Home, 61 Myrtle Street, Worcester, with a Mass at 10:00 am at St. Stephen’s Church, 357 Grafton Street. Burial will follow at St. John’s Cemetery. Visiting hours will be held Monday, March 13 from 5:00 until 7:00 pm at the funeral home.