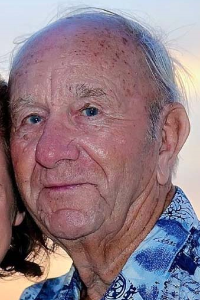 He leaves his wife, Irene (Thain) Mason of Ft. Myers; 2 sons, James P. Mason and his wife Carla Manzi of Webster, Gary R. and his wife Sharon Mason of Plymouth; a daughter, Mary Ellen Mason of Ft. Myers, FL; 6 grandchildren; 10 great-grandchildren; a brother, Robert J. and his wife Barbara Mason of Yarmouth and Ft. Myers, FL; a sister, Lorraine Kilborn of North Grosvenordale, CT; nephews and nieces. He was preceded in death by his son, Kenneth A. Mason in 1996, by a brother, Harold Mason and by 5 sisters, Mary Rose Lyons, Doris Kroll, Marjorie Bernier, Jeanette Lozinski and Shirley Deary.

He was born and raised in Webster, a son of Atwood and Rose (Breault) Mason and attended Saint Louis High School.

He was an Army veteran and ex-POW of WWII.

Mr. Mason and his brother Robert were very successful contractors. They constructed many commercial, residential and religious buildings, including Saint Louis Church in Webster and the Dudley District Court House. Their business took them from northeast Connecticut to southeast New Hampshire. He retired in 1981.

He was a member of Saint Louis Church in Webster. He belonged to the V.F.W, the Exchange Club and the Webster Lodge of Elks #1466. He enjoyed traveling, was a skilled wood worker and was an expert mason.

The funeral will be held Wednesday, March 15, from Scanlon Funeral Service, 38 East Main Street, Webster, with a Mass at noon in Saint Louis Church, 14 Lake St., Webster. Burial will be in Calvary Cemetery, Dudley, with the Webster-Dudley Veterans Council performing the military honors. Visitation will be from 9:45 to 11:15 AM Wednesday morning in the funeral home. Memorial contributions in his name may be made to Saint Louis Endowment Fund, 15 Lake St., Webster, MA 01570.