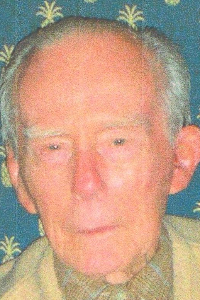 Bill, the son of Charles F. and Anna G. (McKeon) O’Connell was born in Worcester on November 24, 1921. His brother James J. O’Connell served in the Army and was killed during the invasion of Sicily in July 1943. His sister Helen (O’Connell) Trychon of Holden, died in 2012.

Bill, a graduate of Worcester Junior College, worked at the Wyman-Gordon Company before enlisting in the Navy in October 1942. He served as a Motor Machinist Mate First Class on PT-190, the Jack O’ Diamonds, of Motor Torpedo Boat Squadron Twelve, in the Southwest Pacific, seeing action in waters near New Guinea and in the Philippines. P.T. Boat 190 and its sister boat, PT-191 were famous for an epic battle with approximately 40 Japanese aircraft on the morning of December 27, 1943, shooting down four Japanese planes and surviving for 45 minutes until Army Air Force aircraft arrived and drove off the remaining Japanese planes. He was Honorably Discharged from the Navy in 1946, having received the World War II Victory Medal, the American Area Ribbon, the Asiatic Pacific Ribbon 2 Stars, the Presidential Unit Citation and the Good Conduct Medal.
After his discharge he worked for New England Telephone Company as a Service Technician, retiring in 1984 after 37 years of service.

Following his retirement he and Katherine enjoyed travelling across the United States, making three cross country trips with different routes the first 3 years following his retirement and seeing all of the states except Alaska. They enjoyed spending time with their children and grandchildren. They were also fans of the Red Sox, Patriots and Holy Cross Crusaders. Bill also enjoyed fishing and golf.
Bill will be greatly missed by family and friends. He was a great husband, father, grandparent and friend.

Calling hours will be at Callahan Fay & Caswell Funeral Home, 61 Myrtle Street, Worcester on Sunday, March 12th, 5-7pm with a Mass at Christ the King Church, 1052 Pleasant Street, on Monday, March 13th at 10:00am. In lieu of flowers, please consider a gift to Veterans Inc., 69 Grove Street, Worcester, MA 01605.