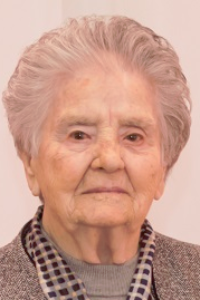 Nikolitsa (Giovanis) Tsamis, 93, of North Providence, RI passed away peacefully at home on Tuesday, February 21, 2017 in the loving arms of her family. Her husband of 41 years, Theodoros Tsamis died in 1994. She was the beloved mother of Angela Vasiliadis and her husband, Frank of North Providence and Paul Tsamis and his wife, Rodi of Paxton. She was the cherished “Yiayia” (grandmother) of seven grandchildren, Tina and her husband, Constantine Marses, Nikki and her husband, Theodoros Fotopoulos, Christos Vasiliadis, and Theodore, Maria, Nicholas, and Nikki Tsamis and six great-grandchildren, Elizabeth, Angela, and Thea Marses and Yiannis, Fotis, and Constandiana Fotopoulos who all adored her. She also leaves her brother Rigas Giovanis and his wife, Demetra of Melbourne, Australia. Three brothers and three sisters of Greece and Australia predeceased her.

Born in Rahes, Krestenon, Olympias, Greece, the daughter of George and Krini Giovanis, she immigrated to the United States in 1968 with her husband and children, and she formerly lived in Clinton and Worcester before moving to North Providence, RI where she resided for the past 22 years.

“Yiayia” will always be remembered as a strong, wise, and humorous lady. Despite her limited formal education in Greece, she was a very smart woman who taught her family many life lessons. Besides caring for her family, to whom she devoted most of her life, she enjoyed reading the Greek newspaper, following the latest world news, and engaging in discussions about endless topics. She had a story about everything, and her joy and laughter were contagious. She left a lasting impression of many special memories for all who knew her, and she will be very dearly missed.