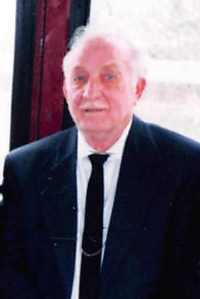 Worcester – Alfred D. Gill, 88, of Worcester, died on Wednesday, February 21 surrounded by his family and loved ones after a long illness.
Alfred is survived by his wife of 64 years, Pearl M. (Allaire) Gill; a son, Mitchell Gill and his wife, Tara of Worcester; a daughter, Susan White and her husband, Brian of Spencer; a brother, David Gill of California; a sister, Edna Gaile Arcouette-Curtis of Rutland; 6 grandchildren, Jennifer, Mitchell, Kerry, Felicia, Andrea and Brianna; 2 great grandchildren, Amelia and Jacob and many nephews and nieces. Mr. Gill was born in Worcester, son of the late Thomas Gill and Edna (Nideur) Gill Arcouette and is also predeceased by his son, John Gill who died on February 16, a daughter in law, Nancy Gill; a brother, Thomas Gill and a sister, Constance Boone.
Alfred served in the United States Navy and worked for the Commonwealth of MA State Highway Department for over 30 years as a foreman retiring in 1992. He previously worked for New England Power Company.
Mr. Gill was a member of the Tatnuck Square American Legion Post, Charlton American Legion Post and volunteered for many years as both a coach and manager for little league baseball. He enjoyed spending time with his grandchildren and also spent much time taking walks since he retired. Al had a great sense of humor and enjoyed making people laugh. Family gatherings always held a special place in Al’s heart and his generosity to his family will be missed.

The funeral will be held Saturday, February 25 from the Alfred Roy & Sons Funeral Home 12 Hammond St. with a mass at 10 AM in Sacred Heart – St. Catherine of Sweden Church 600 Cambridge St. Burial will follow in Worcester County Memorial Park, Paxton. Calling hours will be held from 6 to 8 PM on Friday, February 24 in the funeral home. Memorial Contributions may be made to Veterans Inc. 69 Grove St. Worcester, MA 01605.
To share a memory of Alfred, sign the online guestbook, or for directions please visit www.Royfuneral.com