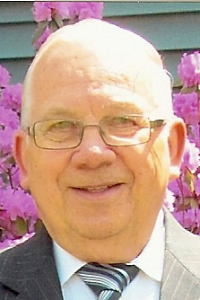 LEICESTER; Raymond H. Brezniak, 80, of 6 Reservoir St., Cherry Valley, died Friday, February 17 at his home after an illness.
He leaves his wife of 44 years, Evelyn A. (Hetu) Brezniak, three daughters; Teresa M. Cacciapouti and her husband Steven of Dudley, Pamela J. Brezniak of Worcester, Paula L. Monsees and her husband Jason of Greensboro, NC, a sister, Eleanor Neiduski of Dudley, two grandchildren, Ainsley and Joshua Cacciapouti and several nieces and nephews.
He was pre-deceased by two brothers, Louis and Theodore Brezniak.
Born in Webster, he was the son of Louis & Caroline (Paholski) Brezniak.
Mr. Brezniak was a graduate of Bartlett High School in Webster, MA. He served his country in the Navy during the Korean War. He was employed as an assembler until retiring in 2002.
He was a member of St. Pius X Church in Leicester. As a long time member of the PAV in Webster, Ray served as a State Commander from 1971-1972. He was a member of the Leicester Senior Center where he enjoyed playing cribbage.
Ray was proud of his Polish heritage which he shared through his cooking and traditional celebrations. What he most enjoyed was spending time with his family, whether it be camping, fishing, tinkering in his workshop to build things designed by his girls, playing cards, cheering on the Patriots, or just being together.

A Funeral Mass will be held Wednesday, February 22 from the MORIN FUNERAL HOME, 1131 Main St. Leicester, with a Mass at 10 a.m. in St. Pius X Church, 1153 Main St., Leicester. Burial with Military Honors will follow in Worcester County Memorial Park, Paxton. Calling hours are Tuesday from 5-7 p.m. in the funeral home.
In lieu of flowers, contributions may be made to the Leicester Senior Center, 40 Winslow Ave., Leicester, MA 01524.