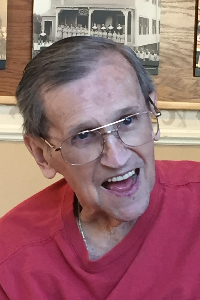 WORCESTER-Thomas H. Menard, Sr., 82, passed away Friday, February 17, 2017 at Knollwood Nursing Center surrounded by his loving family. He was predeceased by his wife of 62 years, Shirley A. (Breen) Menard on June 1, 2015 and their infant son Richard.

Tom leaves eight children, Thomas H. Menard, Jr. and his wife Yujin of Browns Mills, NJ, Carol A. Esposito and her husband John of Millbury, Wayne M. Menard of No. Grafton, Kevin J. Menard and his wife Debra of Leicester, Diane M. Urban and her husband Jerry of Millbury, John D. Menard and his husband Alberto of Spencer, Paul F. Menard of Worcester and Jessica M. Roy and her husband Andy of Worcester; 21 grandchildren, 25 great grandchildren. He also leaves two brothers, Emil and Robert Menard, both of Worcester and a sister, Lorraine Pardee of Worcester; and many nephews and nieces. He was predeceased by three brothers, James, George and David and a sister, Lydia.

He was born in Worcester, son of George and Neva (Cove) Menard and graduated from Worcester Boys Trade School and served in the Army National Guard. Tom owned and operated Menard Electric, Inc. and later worked with his son at KM Kelly, Inc. He served as President of IBEW Local 96 and retired after 44 years as a member. He was a longtime and active member of Sacred Heart-St. Catherine of Sweden Parish where he volunteered his time with Bingo, cub scouts and helped as a handyman. Tom was a cast member at the Disney Store and loved all things Disney, a passion he shared with his grandchildren and great grandchildren. He was an avid walker and loved to travel.

Tom’s family would like to thank the staff at Knollwood Nursing Center and the JHC Hospice team for the wonderful care they provided during his time there.

Visiting hours will be held Wednesday, February 22nd from 4 until 7pm at CALLAHAN FAY & CASWELL Funeral Home, 61 Myrtle St. His Funeral Mass will be held at 10:00 am on Thursday, February 23rd at Sacred Heart-St. Catherine of Sweden Church, 600 Cambridge St. Burial will be in St. John’s Cemetery.

Memorial donations may be made to Jewish Healthcare Hospice or American Parkinson’s Disease Association (APDA).