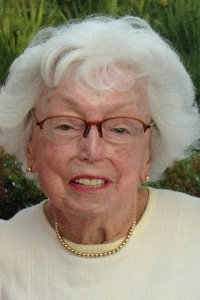 Ruth M. Shea of Westwood Drive, Worcester, age 97, died peacefully, with family, on February 17, 2017 at 93 Burncoat St., Worcester, MA which had been her home for the past year or so.

Ruth was born in Worcester on February 28, 1919, the third of seven children born to the late Timothy S. and Theresa C. Shea, both of Worcester. After graduating from Classical High School, she earned a bachelor’s degree from Simmons College, majoring in home economics. She taught in the City of Worcester public school system and became the director of the David Hale Fanning Trade School for Girls, following which she was recruited by the Commonwealth Department of Education and traveled throughout the Commonwealth evaluating the quality of vocational schools. That led to her appointment and long career as the CEO of the Henry O. Peabody Vocational School in Norwood, MA, where she made a transformative, life-long improvement in an untold number of students’ lives, such that many of them sought and received her valued advice, friendship and support throughout the years, an example being a 90 year old former student, now living in New Hampshire, who recently contacted her to maintain their friendship.

Ruth is survived by two siblings, Richard Shea of Harwichport, Massachusetts, and his wife Frances (Murphy), and Alice Hanlon of Pompton Plains, New Jersey, wife of the late Joseph Hanlon, along with a host of nieces and nephews who loved her and benefited greatly from her example of how life should be lived. She was predeceased by a sister, Helen E. Cosgrove (wife of the late Dr. James F. Cosgrove), two brothers, William T. Shea, late husband of Irene (Fahey) Shea, Robert T. Shea (husband of the late Margaret Garrity Shea), and Grace Shea, all of Worcester.

Ruth was an extremely intelligent, strong, stylish woman, whom many consider the smartest, toughest person they have ever known. She navigated life’s sometimes turbulent channels with unparalleled skill, displaying a wonderful, on rare occasions mildly irreverent, sense of humor right to the end. She, with her sister Grace and assistance from the Visiting Nurses’ Association of Worcester (now the VNA Care Network), took care of their mother, Theresa, in their home for many, many years until Theresa’s death just months short of her 100th birthday. And Ruth in later years took similar compassionate care of Grace, her little sister, for more than ten years in that very same home.

Not coincidentally, Ruth was a devoted Catholic, faithful daughter of the Blessed Virgin Mary and longtime member of Immaculate Conception Parish in Worcester. She also regularly attended mass at Assumption College’s Salisbury Street Chapel of the Holy Spirit and felt close to the Augustinians of the Assumption who advance God’s Kingdom there. Her faith was the rock and foundation for her care for her mother and Grace and for the selfless, generous support she gave innumerable other family members and friends.

Some of the times Ruth enjoyed most, along with travel with her closest friend of many years Connie Turner, were at the family residence in Rye Beach, New Hampshire. She and Grace always put other family members first, allowing them the prime summer months at Rye, but in the spring, late summer and fall they relished the sea air, flowers and largely unchanging small town serenity and neighborliness of Rye. Thanks to their generosity, generation after generation reconvene there every year, planting and nurturing seeds of love among cousins from far-flung areas of the country that have blossomed into the closest of life-long friendships.

Many believe correctly that if only they could live life half as well as Ruth did hers, theirs would be a life well-lived.
On Ruth’s behalf the family wishes to extend its heartfelt thanks to all who provided Ruth with such loving care and assistance in her last years and days, including the uniquely gifted and loving Jim Bissell, her remarkable primary care physician Gary Blanchard and his assistant Ashley Estabrook, Dr. Brian Burroughs and the nurses and staff of St. Vincent’s hospital, Margaret Tavano, who was Ruth’s constant companion for the past year and brightened her days with countless hours of humor and conversation, and the wonderful aides provided by Pamela McKinley of Family Tree Home Care, notably Veronica, Pauline, Gladys, Jane and Mary. As well as to Fr. Walter Riley, Ruth’s pastor, who brought her the sacraments, good humor, wisdom, joy and solace in recent months.
To the VNA Care nurses, managers, therapists and hospice caregivers, to mention just a few, Ruth Sunshine Wagner, Giselle Desroches, R.N., Sue Drapeau, Wendy Kokernak, Lauri Auer, Kathleen Wilson, Regina Cunningham, R.N., Paula D’Anello, Liz Rotti and Chaplain Nancy Small, without whom Ruth’s life could never have been as long and happy as it was.

To Patti Geddes, without whose daily help over the past years it would have been impossible to enlist and ensure continuation of the assistance of all of those above. And to Ruth’s wonderful friend, Kathy Bolafka, who spent months helping Ruth after her initial fall in August 2015, and Ruth’s close friends from Rye Beach who so faithfully kept in contact with Ruth through calls and correspondence, such as Bea McDevitt’s numerous, gracious letters which Ruth so enjoyed.

Thanks, finally, to all the family members and friends who provided such loving care to Ruth, especially in the past year. Their visits, dinners, phone calls, advice and companionship were invaluable in enriching Ruth’s life and assuring her of their enduring love. While the members of the ‘Ruth army’ are too numerous to mention, particular note is due Ruth’s niece, Priscilla Shea, who offered, welcomed and continuously facilitated Ruth’s new home and loving care during the past year, and Sara Shea who accompanied Ruth to medical appointments and was a faithful, uplifting companion during that time.

Ruth's funeral will be held on Wednesday, February 22, from Callahan Fay & Caswell Funeral Home, 61 Myrtle Street with a Mass at 11:00 am at Immaculate Conception Church, 353 Grove Street. Burial will follow at St. John's Cemetery. A visiting hour will also be held on Wednesday, from 9:30 until 10:30 am in the funeral home.
In lieu of flowers contributions may be made in Ruth’s memory to the VNA Care Network and Hospice, 120 Thomas St., Worcester, MA 01608, to the Roman Catholic Bishop of Worcester for the benefit of Immaculate Conception Parish, 353 Grove St., Worcester, MA 01605, or to the Augustinians of the Assumption, 330 Market St., Brighton, MA 02135.