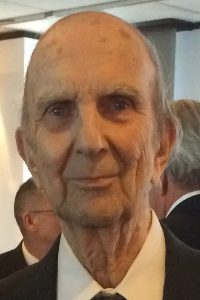 He was born in Thompson, CT the son of George and Speranta (Petrescu) Leasca and graduated from Bryant College and earned a management certificate from WPI. Peter worked as a financial advisor for 41 years; a Vice President, retiring 10 years ago, from Morgan Stanley, where his legacy continues today in Wealth Management as The Leasca Group, which was founded 52 years ago. Also, he was the President/Founder of the Worcester Stockbrokers Association for over 30 years which often hosted local public companies to speak. Mr. Leasca was a member of St. Spyridon Greek Orthodox Cathedral, its Order of AHEPA where he was a member for 65 years, and chaired its veteran’s committee. Peter was an adjunct Professor at Worcester State University, QCC and Becker College where he taught Investments. He was a pioneer in 1991 on Greater Media Cable local TV#3 Stockwatch Report as its first nightly stockmarket reporter. Peter was a 32nd Degree Mason of the Scottish Rite. He was a member of the Melha Shrine Center, Springfield. Mr. Leasca was instrumental in the bringing one of the original Landing Ship Tanks from Greece back to the United States where it now serves as a floating museum in Indiana. This became a documentary on the History Channel called Hero Ships.
Peter was a veteran of the United States Navy serving during World War II. He was proud of his service and was active with the City of Worcester Veteran’s Services and was active with the World War II dedication. He led many parades in the city. The Worcester Armed Services Committee awarded Peter with the highest civilian honor as the Veteran of the Year in conjunction with the ROTC Program in a formal ceremony last May at the College of the Holy Cross.
His funeral is Monday, February 20th from O’CONNOR BROTHERS FUNERAL HOME, 592 Park Avenue with a service at NOON in St. Spyridon Greek Orthodox Cathedral, 102 Russell Street. Burial will follow in Hope Cemetery. Calling hours are Sunday, February 19th from 3:00 until 6:00 PM in the funeral home. In lieu of flowers memorial contributions may be made to St. Spyridon Greek Orthodox Cathedral Endowment Fund, 102 Russell Street, Worcester, MA 01609.