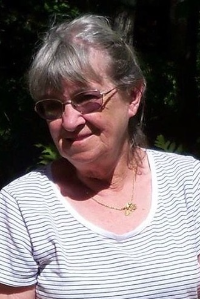 Charlton
Shirley Mary (Gagen) Harris, of 56 Nugget Drive in Charlton passed away peacefully, surrounded by her loving family.
Shirley was born February 11, 1945 at home in the Cherry Valley section of Leicester, daughter of Daniel and Clara (LeBlanc) Gagen, Jr.
She leaves her husband of 50 years, Ralph W. Harris, Sr. and they renewed their vows on February 13, 2017.
Besides her husband, Shirley leaves her children: Lynn Foisy and her husband Michael of Rochdale, Marie Sullivan and her husband James of Lowell, Ralph W. Harris, Jr. and his wife Crissy of Charlton, her grandchildren :Edmond Foisy, Felecia Foisy, Elizabeth Harris, Daniel Harris, Casey Sullivan and great grandchildren: Kaylee Sue Foisy, Lilly-Ann Foisy, Alexander Cooper, Jr., a brother, James Gagen and many nieces and nephews.

She was predeceased by sisters, Ann Ward, Clara Evans, Evelyn Beaudette and a brother, Francis Gagen.
Shirley was a one of the founding members of the Charlton Firefighters Ladies Auxiliary teaching fire prevention programs. She was also instrumental in purchasing the first Jaws of Life for the Town of Charlton. She was also a dispatcher (24L) for the Charlton Fire and Police Departments for many years before the 911 system was implemented. She was a member of CERT (Community Emergency Response Team).
Shirley was a graduate of Leicester High School, and worked most of her adult life in retail at Zayre, Ames and Building 19, and Norton Co. Plant#8, mixing, where she met her husband to be .After retirement she worked for the Town of Charlton at each election manning the polls.
Shirley loved to crochet and sew, her specialty was making afghans for her loved ones and friends. She was also a genealogist, avid bird watcher, book reader, loved to bake with her grandchildren, watch the Food Network and Loved to Puppy sit her “Grand puppies” Sheba and Hannah. She was a member of St. Joseph Church in Charlton.

Funeral Service for Shirley will be Monday, February 20, 2017 at 11:30 AM in the ROBERT J. MILLER-CHARLTON FUNERAL HOME, 175 Old Worcester Rd. followed by burial in West Ridge Cemetery in Charlton.

Calling Hours will be Sunday, February 19, 2017 from 5-8PM in the Funeral Home.
In lieu of flowers, Memorial Contributions are suggested to: Tri Epic, P.O. Box 145, Charlton City, MA. 01508.
An On Line Guest Book or to Share a Memory of Shirley, please visit:RJMillerfunerals.net