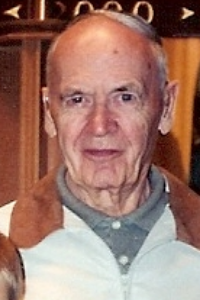 EAST BROOKFIELD: Harold W. Ramsey, Sr., 98 of Gleason Ave., died Wednesday, Feb. 15 in Quaboag Rehab & Skilled Care Center, W.Brookfield after a short illness.
His wife of 62 years, Louise M. (Bercume) Ramsey, died in 2015. He leaves his sons H.Warren Ramsey Jr. and his wife Ann Marie, Robert W. Ramsey and his wife Elaine and Scott M. Ramsey and his wife Eva all of Spencer, 5 grandchildren; Laura, Warren & Ben Ramsey and Sarah & Ian Ramsey, nieces and nephews. He is predeceased by a brother Boyd Ramsey and a sister Goldie Dupont.
Born in Nova Scotia, he was the son of Harry and Hazel (Rice) Ramsey and graduated from North High School in Worcester. He later served his country during WWII with the Army Air Corps.
Harold was a Trooper with the Mass.State Police for 11 years, he later worked at Norton Co. in Worcester for more than 20 years, retiring in 1981.
He was a member of St. John the Baptist Church.
A funeral mass will be held at 11 a.m. on Monday, Feb. 20th. in St. John the Baptist Church, No.Brookfield Rd., E.Brookfield. Friends are asked to go directly to the church as calling hours are private. Burial will be at a later date in Evergreen Cemetery, E.Brookfield. In lieu of flowers, contributions may be made to Second Chance Animal Shelter, P.O. Box 136, E.Brookfield, Ma. 01515