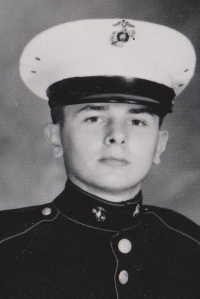 Charlton
Gordon L. Lomax, Sr. a longtime resident of Charlton died suddenly at the age of 69.
Gordon was a longtime sufferer of PTSD, he died of a heart attack from dealing with the stress of PTSD.
He leaves his best friend and the love of his life and wife of 46 years, Laura L. (Connors) Lomax, his daughter Theresa Fanion and her husband Ronald of Sterling, CT., 2 sons, Gordon L. Lomax, Jr. and his wife Melissa of Charlton and David Lomax and his wife Dawn of Holland, MA. He also leaves his favorite grandchildren; Joshua and Autumn Fanion of Sterling, CT., Sabrina, Hailey, Alissa Lomax of Charlton, Tyler, Noah and Daniel of Charlton Christian and Justin Jones, Chloe and Isabella Fitzgerald of Holland and his mother, Olive (Fyffe) Kozak of Marlborough, 3 brothers, 1 sister and many nieces and nephews.
Gordon proudly served his country as a Lance Cpl. with the U.S. Marine Corps in Vietnam from 1968-1969 with the 1st Marine Division, 7th Battalion.
He graduated from Richfield Springs Central High School in Richfield Springs, N.Y., with the quickest pin in history on the schools Wrestling Team.
The ‘Light’ during his struggle with PTSD was teaching his grandchildren and their friends many games, including poker and coin toss.
He also loved taking his pal ‘Molly’ for walks.
Gordon worked hard in the wood and land clearing business for many years, which is still carried on by his family.
Funeral Services for Gordon will be Monday, February 13, 2017 at 10 AM in the ROBERT J.MILLER-CHARLTON FUNERAL HOME, 175 Old Worcester Rd., Charlton. Burial with Military Honors will follow at Worcester County Memorial Park in Paxton.
Relatives and friends are invited to meet with the family for Calling Hours on Sunday, February 12, 2017 from 5-8PM in the Funeral Home.
In lieu of flowers, Memorial Contributions may be made to: Disabled American Veterans (D.A.V.) c/o V.A. Regional Office, Room 1575B, JFK Federal Bldg., Government Center, Boston, MA. 02203.
To send a massage of condolence or Share A Memory of Gordon, please visit:RJMillerfunerals.net
‘Once a Marine, Always a Marine’
‘Semper Fi’