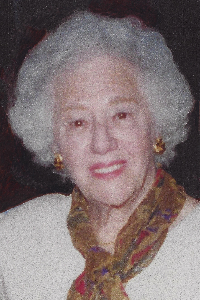 Mary M. (Stavrou) Rossetti, 97, of Worcester died, Wednesday, February 8th in the Jewish Healthcare Center, with her loving family by her side. Her husband of 64 years, John A. Rossetti died in 2014. She is survived by her son, John A. Rossetti, Jr. and his wife, Pamela; two daughters, Valerie M. Rossetti and Vanessa G. Phethean and her husband, Douglas all of Worcester; five grandchildren, Matthew Rossetti and his wife, Asjia, Jonathan Rossetti and his partner, Anna, David Rossetti, Olivia and Christopher Phethean; three great-grandchildren, Jaxon, Genevieve and Gabriel Rossetti and two god-daughters, Katherine Dodakian and Mary Arden. She was predeceased by a grandson, Daniel Rossetti and her six siblings, Charles, Rose, Betty, Stella, Pearl and Katherine.

She was born in Worcester, the daughter of Arthur and Anna (Kamelleris) Stavrou and was a graduate of the former High School of Commerce. She was a long time member of St. Spyridon Greek Orthodox Cathedral, their choir, the Daughters of Penelope, and the Ladies Philoptochos Society. Mary was active in fund raising efforts when St. Spyridon Greek Orthodox Cathedral relocated from Orange Street to its current location. Her love of Greek music and dance was instrumental in her planning and participating in Greek dances over the years. Her first love was spending time with her husband, her family, and especially her grandchildren. Mary was a hard working individual who was employed many years at her father’s store at Newton Square, Pop’s Spa, where war veterans, the elderly, young college students, the needy and all types of patrons were treated with love, respect and humor. Patrons thought of Mary and her family as extended family as they developed beloved friendships, participated in community events, volunteered services for charity, corresponded with the local servicemen during WWII and, after the war, befriended local veterans. Mary’s family often took in the less fortunate at their family home. This early experience instilled empathy for people that enriched others throughout her life. Her other employment included Table Talk, WPI, and Harrington & Richardson Arms Company. Mary’s laughter, friendship, hospitality and exceptional cooking, will be sorely missed by all who knew her.
The family wishes to extend their heartfelt thanks to the staff of the Jewish Healthcare Center and residents, for the wonderful support and unending love provided to our mother over the past five years.