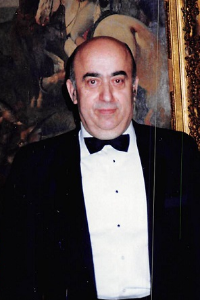 Theodore “Teddy” Tembenis, 83, of Worcester, passed peacefully into the arms of the Lord on Monday, February 6th at home, surrounded by family after a short battle with cancer. He is survived by his loving wife of 50 years, Toula (Vorres) Tembenis; his beloved children, Harry T. Tembenis and his wife, Gina and Maria Tembenis all of Worcester; his sister Anastasia Kostandopoulos of Kyparrisia, Greece. He was predeceased by his brother George Tempenis of Seneca, SC and his beloved grandson, Elias H. Tembenis of Worcester. He also leaves nieces and nephews in Greece, South Carolina, Illinois and Massachusetts.

Teddy was born in Filiatra, Messinias, Greece, the eldest son of Haralambos and Maria (Georgiou) Tembenis. Upon completing high school and service in the Greek military, he attended the police academy and rose through the ranks to sergeant. His years as a police officer brought him to many beautiful Greek islands such as Rhodes, Corfu, Tinos, Naxos and Syros. He enjoyed a great career in law enforcement, dreaming of coming to the United States and ultimately came to Worcester to follow his dream.

He re-invented himself and started a lengthy career in the restaurant business. He worked for various area restaurants including the Coach and Six, Putnam and Thurston’s, The White House Restaurant, Finian’s and ultimately the El Morocco Restaurant, where he would become an integral part of this Worcester landmark. He developed quite a following and a reputation as a poised professional and was a consummate host to his guests. He served many celebrities at ‘the El’ such as Liza Minelli , Rodney Dangerfield, Arthur Fiedler and many more, all with the same meticulous care and European flair.

He thoroughly enjoyed traveling, particularly to visit friends and family in Greece, Chicago and South Carolina. He loved good food, wine and music, especially when shared with friends, family and loved ones. He was the life of the party and he will leave a great void with his absence.
The family would like to extend their heartfelt thanks to the team at the VNA Hospice and Palliative Care for their assistance and support through this period.