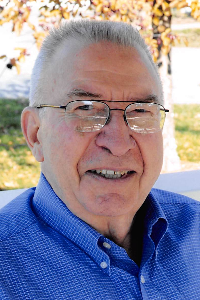 He was born in Naugatuck, CT the son of John M. and Belle (Osborn) Sutherland. He attended the Naugatuck Public Schools and was salutatorian of the Naugatuck High School Class of 1941.

He was a member of the Yale College Class of 1945, interrupting his education to serve with the U.S. Army in the European Theater of Operations during World War II. Jack received his bachelor’s degree from Yale, with honors, in 1947.
Following graduation, he moved to Worcester, where he joined the Massachusetts Protective Association, which later became the Paul Revere Life Insurance Company, as an actuarial trainee. He earned his designation as a Fellow of the Society of Actuaries in 1956. In 1977, he stepped down as Vice President and Senior Life Actuary at Paul Revere in order to establish his own practice as a consulting actuary in Worcester. In 1984 he merged his practice with Hooker & Holcombe, Inc. of West Hartford, CT, and retired in 1992.

Jack was a longtime member of the Worcester Rotary Club and a volunteer with the Yale Alumni Fund. He was a former member of the Board of Trustees and the Finance Committee of the Salem Community Corporation, the governing body of the Briarwood retirement community, where he had lived since 2001, and had also served on the Briarwood Residents Association Representative Council. He was an avid traveler; a profile in the Worcester Sunday Telegram in 1995 described him as “the county collector” and reported that he had completed his goal of visiting every county in the United States and Canada – more than 3,000 counties in all.

He married the former Jean D. Holmberg in Naugatuck in 1951; she died in 2007. He is survived by four children: Jill S. Hamilton and her husband, Robert of Easton, PA, Deborah S. Panella of Harrison, NY, John M. Sutherland, III and his wife, Nina of Norton, MA and Douglas W. Sutherland of Basking Ridge, NJ; and by eight grandchildren and two great-grandchildren. He is also survived by a sister, Jean S. Gerrish of Wakefield, RI, and a sister-in-law, Jeanne S. Sutherland of Naugatuck, the widow of his brother Robert C. Sutherland.

Services will be private, and interment will be at the convenience of the family. The family requests that flowers be omitted. Memorial contributions may be made to the Briarwood Residents Assistance Fund, 65 Briarwood Circle, Worcester, MA 01606, to Yale University, 157 Church St, New Haven, CT 06510-2100 or to the charity of the donor’s choice. O'CONNOR BROTHERS FUNERAL HOME, 592 Park Avenue is assisting the family with arrangements.