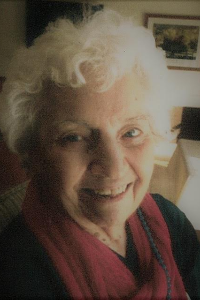 WORCESTER__Agnes A. Jankowski, 96, formerly of 106 Beeching Street passed away on January 31st at Merrimack Valley Health Center in Amesbury. She leaves two daughters, Barbara Melanson of Groton Long Point, CT and; Ann Popoli of Newburyport; two sons, Thaddeus J. Jankowski, Jr, of Portsmouth, NH and David J Jankowski of Boise, Idaho. She will be missed by her eleven grandchildren; eleven great-grandchildren and many nieces and nephews. She was predeceased by her sister, Stella Taradejna, and two brothers Bennie and Jess Anteski, all of Chicago, IL. Her parents were the late George and Mary (Wasowska) Anteski. Her husband of 62 years, Dr. Thaddeus J. Jankowski, died in 2005.
Agnes was born on January 3, 1921 in Logan, West Virginia. She graduated from Sharples High school. After attending business college in West Virginia she moved to Chicago with her family where she met her husband, then a dental student. After World War II they settled in Worcester where they became active in area professional, religious and civic organizations. She was very proud to have been a founding member of the Women's Auxiliary to the Worcester Dental Society and made many lifelong friends across the country through her work with this organization. For many years she enjoyed hosting the holiday celebrations for the extended family, especially Christmas Eve. Agnes and Ted spent many relaxing summers in their cottage on Quaboag Pond in East Brookfield where they were active in the Quaboag & Quacumquasit Lake Association.
Her family will greet relatives and friends on Friday, February 10 from 10:30 A.M. -12:00 P.M. in Henry-Dirsa Funeral Home, 33 Ward St., Worcester, MA. The visitation will conclude with a prayer service at 12:00 P.M. Burial will be private at a later date.
In lieu of flowers, memorial contributions may be made to Fisher Center for Alzheimer’s Research Foundation, 110 East 42nd Street, 16th Floor New York, NY 10017 or to a charity of one's choice