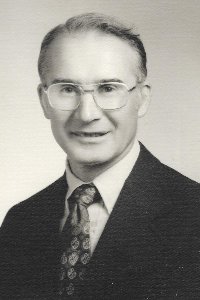 Worcester: Anthony J. Ringiewicz, 96 passed away on Friday, January 27, 2017 in Holy Trinity Nursing and Rehabilitation Center. He leaves his wife of 67 years, Adele A. (Kandrote) Ringiewicz; two sons- Dr. Mark A Ringiewicz and his fiance Peggy O'Neil of Rehoboth and Dr. Paul A. Ringiewicz of Media, PA; six grandchildren- Abby, Jessie, Rachel, Kerry, Jake and Aidan, a great-grandson Logan; a sister Julia Latino; and many nieces and nephews. He was predeceased by four brothers- Steven, John, William and Justin Ringiewicz and a sister Jean.

Tony was born in Worcester, son of the late John and Eva (Waranowicz) Ringiewicz. He proudly served his country in the US Navy during WWII on the USS Bainbridge in the Pacific Theatre and in the North Atlantic Patrol. He graduated with a Bachelors Degree in Engineering from Northeastern University and worked as a Registered Professional Engineer for the New England Power Service and Mass Electric. He was a member of the Greendale Men's Club, the Men's league at Green Hill Golf Course, the Knights of Columbus and past president of the Greendale Kiwanis Club. He believed in hard work and fairness. He never needed a repairman, instead fixed everything on his own. He was always there when you needed him, and was known to be " such a good guy".

He loved his boys and had such pride in them. He loved the outdoors, especially any beach, his vegetable garden, and any golf course where he could play his memorable slice. His 15 minutes of fame was in bowling the high single candlepin total in the 1962 Nees Bowling Tournament.

He spent 67 years of care, love and devotion with his wife, "my darling" Adele. Her devotion to him never waned through his final years with dementia. He will be sadly missed by all those whose lives he touched.

Calling hours will be held on Wednesday, February 1, 2017 from 3-6 p.m. in Nordgren Funeral Home 300 Lincoln St. Worcester, MA 01605. A funeral Mass will be held on Thursday, February 2, 2017 at 10:00 a.m. in Our Lady of the Rosary Church 25 Fales St. Worcester. Burial will follow in St. John's Cemetery. Flowers may be sent or donations may be made to the Alzheimer's Association 480 Pleasant St. Watertown, MA 02472. For directions or to leave an online condolence message, please click link.