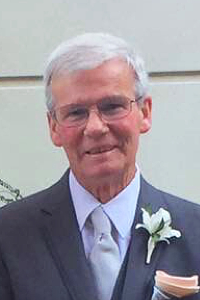 Robert M. “Bob” McShera, 65, of North Brookfield died Monday, January 23rd in Brigham and Women’s Hospital surrounded by his family. He leaves a son, Robert G. McShera of Brighton; two daughters, Jamie J. McShera of New Braintree and Kaitlyn Buchanan and her husband, Robert of Concord, NH; four brothers, John McShera and his wife, Ellen of North Myrtle Beach, SC, William McShera and his wife, Marion of Worcester, Richard McShera and his wife, Christine of Worcester and David McShera and his wife, Nancy of Valrico, FL; four sisters, Betty Belanger of Meredith, NH, Louise Burch and her husband, Robert of Leicester, Peggy Richards and her husband, Philip of Worcester and Mary Fran Terraccino and her husband, Joseph of South Hackensack, NJ; a granddaughter, Allana Roy and many nieces and nephews. He also leaves behind his cherished friend, Patricia Jacques of Warren and his beloved dog, Neeko.
He was born in Worcester the son of John and Marguerite (Riopel) McShera. Bob was an electrical supervisor with Flexcon for the past 31 years. He enjoyed spending his time golfing, bowling and watching the Patriots. Bob cherished the time he spent with his family. He will be deeply missed by many.
His funeral is Saturday, January 28th from O’CONNOR BROTHERS FUNERAL HOME, 592 Park Avenue, Worcester with a Mass at 10:00 AM in Our Lady of the Angels Church, 1222 Main Street, Worcester. Burial will be at the convenience of the family. Calling hours are Friday, January 27th from 4:00 until 8:00 PM in the funeral home. In lieu of flowers memorial contributions may be made to Astra Zeneca Hope Lodge, 125 South Huntington Avenue, Boston, MA 02130.