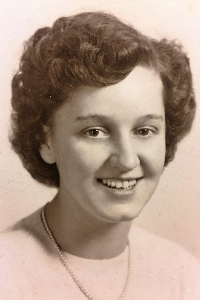 Maryann (Bollus) Scotia, 84, of Worcester, passed away Monday, January 23rd in the St. Francis Home. Her husband of 44 years, Anthony J. Scotia, died in 2004. She leaves a son, John A. Scotia and his wife Denise of Leicester; and two grandchildren, Betsy and Michael Scotia of Leicester. She was predeceased by her brother, John P. Bollus.
She was born in Worcester, the daughter of Abraham and Eva (Stedt) Bollus and lived here all her life. Mrs. Scotia was a bookkeeper for Associated Grocers before retiring.
Her funeral service and burial at Notre Dame Cemetery will be held privately. There are no calling hours. In lieu of flowers, donations in her memory may be made to the St. Francis Home, 101 Plantation Street, Worcester, MA 01604. O'CONNOR BROTHERS FUNERAL HOME, 592 Park Avenue, is assisting with arrangements.