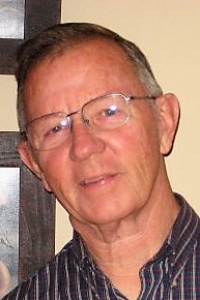 Joseph Bernard McManus, 77, passed away peacefully on January 12, 2017 after a brief battle with cancer. He was the beloved husband of Joan M. (Fell) McManus. Joseph was born in Worcester, MA in 1939. He was the son of the late Edward and Catherine (Burns) McManus. “Joe Tiger” was the eight-year-old national pull up champion representing the Lincoln Square Boys Club. Joseph served in the U.S. Airforce as an airman and later worked for Coghlin Electric where he enjoyed a career that spanned over thirty years.
Joe married his sweetheart, Joan M. Fell in April of 1963. Together they raised four children in Worcester. After retirement, he moved to Grafton, MA and later Melbourne, Florida where he lived for eight years. He moved back to Massachusetts and settled in Whitinsville in 2015. He was a devoted family man who enjoyed countless summers with his wife, children and friends at Hampton Beach, NH. Joe loved following New England sports, bowling, and playing cards. He always looked forward to heading out for coffee with his best friend and brother, Ed.
In addition to Joan, his loving wife of 53 years, Joe is survived by his children, Cheryl McKenna and her husband Robert of Rutland, MA, Marie Brigham and her husband James, of Upton, MA, Joseph McManus Jr. of Hampton, NH, and Chief Naval Aircrewman (Operator)Brian McManus, and his wife Maegan of Gulf Breeze, FL; siblings, Patricia McManus of Marlborough, MA, Deborah Healy of Oxford, MA, Edward McManus and wife Barbara of Auburn, MA; sister-in-law, Patricia Pennucci and her husband Anthony of Shrewsbury, MA; grandchildren, Daniel McKenna, Owen and Caroline Brigham, Brigid and Henry McManus and many nieces and nephews. Joe was predeceased by sisters, Rose Berberian and Mary Vinton.
The family would like to express their sincere gratitude to Joe’s hospice team, especially Michelle, from JHC Homecare Hospice and Dr. David Shepro and his staff for their compassionate and loving care.
His funeral is Thursday, January 19th from O’CONNOR BROTHERS FUNERAL HOME, 529 Park Avenue with a Mass at 11:00 AM in Blessed Sacrament Church, 555 Pleasant Street, Worcester. Burial will follow in Worcester County Memorial Park. Calling hours are private at the request of the family.
In lieu of flowers, memorial contributions may be made in Joe’s memory to the Boys and Girls Club of Worcester, attention: Liz Hamilton, 64 Tainter Street, Worcester, MA, 01610. Donations may also be made online at: http://www.bgcworcester.org/support-our-club/donate.