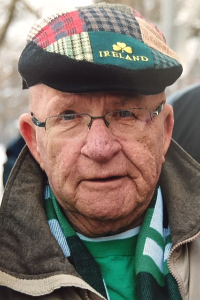 Roger P. "Paul" Nugent, 79, of Worcester, died, Saturday, January 14th at UMass Hospital. His wife Doris T. (Conroy) Nugent died in 1994. He is survived by his two sons, Roger P. Nugent, Jr. of Worcester and Thomas A. Nugent and his wife, Grace of Charlton; a brother, Walter J. Nugent and his longtime companion, Jane Lantz of Worcester, his sister, Mary Sacco of Worcester; four grandchildren, Sarah, Emily, Valerie and Kerri Nugent; his former daughter-in-law, Dawn Nugent of Worcester and several nephews and nieces. He was predeceased by his grandson, James P. Nugent and a sister, Catherine Mulcahy.

Paul was born in Worcester, the son of Roger A. and Helen R. (Ramey) Nugent and was a graduate of South High School. Mr. Nugent had served honorably in the United States Navy. He had at one time worked at the former Harrington and Richardson, and later owned and operated the former University Grille with his sons. Paul then worked as a volunteer for the Meals on Wheels Program. He was a member of St. Peter's Parish, the former Main South Post 341 American Legion and a former member of the Knights of Columbus.