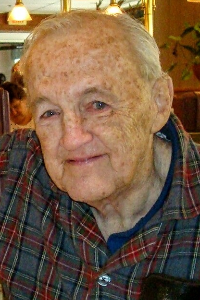 Eugene F. Tivnan died peacefully in his sleep Thursday morning, January 12, 2017, at the Hermitage in Worcester where he had resided with his wife, Marion U. (Zinkevich) Tivnan since 2010.
Eugene was born and raised in Worcester, son of the late Joseph F. and Beatrice I. (Miller) Tivnan. He attended St John's High School and went on to serve in the U.S. Army, stationed out of Fort Banks, MA. Eugene worked as a letter carrier for the U.S Postal Service for over 30 years retiring in the early 1980’s. He was recognized for an act of heroism by the USPS in 1972 for jumping into a run-away, driverless vehicle with a four-year old child inside while he was delivering mail. After extreme effort, he was able to stop the vehicle averting a serious accident and possibly saving the life of the child. After his retirement Eugene concentrated all his efforts into building a successful business, Elite Billiards which he owned and ran until the late 1990’s.
Eugene is survived by his of wife of 64 years, Marion U. (Zinkevich) Tivnan; a son Eugene F. Tivnan, Jr. of Worcester; a brother Edmund Lincoln Tivnan and his wife Jean M. (Costello) Tivnan of Worcester, a sister Mary Jane Kelley and her partner Richard Mansell of West Palm Beach, FL and many nieces and nephews. A brother Joseph Tivnan and two sisters, Nancy Pedersen and Elizabeth Ann Deely predeceased him.
Eugene lived life to the fullest and was always there to help others. He maintained an optimistic outlook even during the most trying of times. He enjoyed following world news and politics, getting out weekly to play cards with friends and was a lover of sports, especially the Red Sox.
Calling hours at Nordgren Memorial Chapel were held Monday Jan. 16, 4-6 p.m. The funeral was held on Tuesday Jan. 17 from Nordgren Memorial Chapel, 300 Lincoln Street, with a mass at 10 a.m. in St. Joan of Arc parish. Burial is in the Worcester County Memorial Park, Paxton.

Never Better. For all who knew my Dad, it was his standard reply to anyone who asked how he was doing. No matter what else might have happened earlier, he still managed to look at the bright side in all instances. His charisma and positive attitude were his hallmarks, traits that made him popular with many people, friends, and family alike.
My Dad was also a very compassionate and giving man. He had a tendency to put his own needs aside while doing whatever he could to lend a hand to help others. On occasion a few took advantage of his goodwill but he would brush it all aside and continue on undaunted.

He was a very social man who enjoyed the company of others. Family was an important part of his life and he loved visiting with relatives whenever he could. He also enjoyed spending time with friends of which he had more than a few.
My dad was hard-working, determined, and never one to quit, as evidenced by the success of his business, Elite Billiards. He served as the first president of the United Billiard Association and was a major distributor of billiard equipment throughout New England. He was also inducted into the prestigious Charter category of the New England Pool and Billiard Hall of Fame. He was very proud of his accomplishments and so am I.

When dementia took hold, my Dad fought it and was initially able to mask it. Throughout the decline that followed he still maintained his persona and good spirits. He quickly became a favorite of much of the staff at the Hermitage. Near the end of his illness, he lost the ability to speak which was visibly frustrating to him. But on those occasions where I would be able to decipher what he was saying, I would repeat it back to him and he would beam with a big smile.

My dad was a devoted husband to his wife Marion, a great father to me, and a wonderful uncle to his many nieces and nephews. It’s a smaller world without him. May he rest in peace. Amen.


For directions or to leave a message in the online guestbook, please click link above.