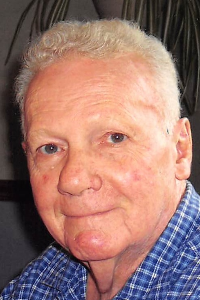 William D Cunningham, 92, of Worcester passed away at home on January 10, 2017 surrounded by his loving family. Bill was the beloved husband of Mary L (Grover) Cunningham. He was born in Jermyn, PA on July 19, 1924, son of Bernard and Thelma (Burdick) Cunningham. A WWII Army veteran, Bill served in Europe for 26 months in the 194th Field Artillery Battalion and received five bronze stars. He worked as a sales representative for US Plywood, retiring in 1987.

Bill was a devoted family man and enjoyed many sports. An avid Penn State football fan, he also enjoyed golf, fishing, tennis, and ice skating. In his younger years he loved bowling and playing pool. Bill was a member of Wesley United Methodist Church in Worcester.

In addition to Mary, his loving wife of 61 years, Bill is survived by his children, Cheryl Cunningham with whom he lived, Brenda Gordon and her husband Richard of Sutton, MA, Lynda Holmes and her husband Warren of Holden, MA, Gail Economou and her husband Kosta of Worcester, and Mark William Cunningham of Manchester, CT; siblings Janet Vaters of Mashpee, MA, Wayne Cunningham and his wife Susan of Chelmsford, MA, and Karen Ortolino of Dracut, MA; grandchildren, Jonathan, David and his wife Andrea, Timothy, Daniel, Julia, Kristina, and Kendall; great grandchildren Elena and Seth, and many nieces and nephews. Bill was predeceased by his sister, Romayne (Cunningham) Keller.

The family would like to express their sincere and heartfelt appreciation to the staff of JHC Homecare Hospice Private Care for their compassionate and kind care, with a special thank-you to Sister Jane.

Relatives and friends may attend his visitation in O’CONNOR BROTHERS FUNERAL HOME, 592 Park Avenue on Saturday January 14 from 11:00 A.M. until 12:00 P.M., followed by his funeral service at Noon in the funeral home. Burial will be in Rural Cemetery. In lieu of flowers, donations may be made in Bill’s memory to JHC Homecare Hospice Private Care, 629 Salisbury St, Worcester, MA 01609.