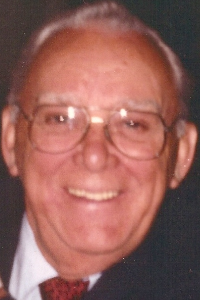 LEICESTER: Henry T. Perron 88 of Tanglewood Rd., died Tuesday, Jan. 3 at St. Vincent Hospital in Worcester after a brief illness, surrounded by his loving family.
He was the husband of Margaret E. (Bourgeois) Perron who died in 2011. He leaves his brothers Paul Perron and his wife Jeanne of Spencer, Joseph Perron of Leicester and Robert Perron and his wife Shirley of Leicester, sisters Pauline Choquette and her husband Raymond of E.Brookfield, Dolly Choquette and her husband Rosaire of Spencer, brother in law Robert P. Bourgeois and his wife Patricia of Spencer, and many generations of nieces and nephews. He is predeceased by brothers Albert, Walter, Carl and sisters Leah Brunett, Hazel Sjogren and Mary LeFavre.
Henry was plant manager at Trumbull Steel Corp., then Edgecomb Steel in Concord, NH for 30+ years. Hank and Peg retired to Leicester in 1986 to be closer to family and friends. Prior to that, he lived in Boscawen, NH from 1955-1986. They loved spending time with family and friends at their camps on Thompson Pond in Spencer, and then on Cedar Meadow in Leicester.
Born in Worcester, he was the son of Frank and Gertrude (Bostrum) Perron and later served his country with the U.S. Army during the Korean War. He was a member of the Gaudette-Kirk Post 138 American Legion in Spencer. He enjoyed casino visits with family and was very involved with his family. He was an avid pitch player and enjoyed fishing. He was a longtime member of the Bayberry Monday Night Men's Bowling League.
Hank was a great and kindhearted man. He was full of love, happiness, and joy, which he brought with him everywhere he went. It is a sad time for all his family and friends. He is loved and cherished by all, and will be greatly missed. We love you.
Henry's funeral services will be held on Friday, Jan. 6 at 10 a.m. in the MORIN FUNERAL HOME, 1131 Main St., Leicester. A calling hour will precede the service on Friday from 9 to 10am. Burial, with Military Honors, will follow in Worcester County Memorial Park, Paxton. In lieu of flowers, contributions may be made in his memory to Nick's House "Helping the Community One Soldier at a Time" @ www.nickperryshouse.org.