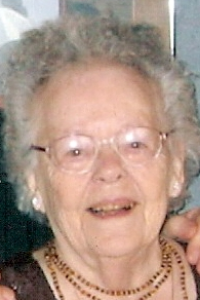 WORCESTER/LEICESTER: Germaine D. (Gilbert) Green 100, formerly of 31 Roxbury St., Worcester and longtime resident of Leicester (Rochdale), died peacefully, Friday, Dec. 30 in the Lutheran Home in Worcester where she had been a resident since 2009.
Her husband of 63 years, Charles D. Green died in 2002. She leaves her son Michael A. Green and his wife Gilda of Worcester, her daughters Susan F. Kozlowski and her husband James of Webster and Helen A. Kozlowski of Rochdale, grandchildren; Michael, Debra, Kristine, Steven, Molly, Nathan, Sophie, Nell and Will, great grandchildren James, Matthew, Mackenzie, Logan, Jennifer, Audrey, Theodore, Charles, Joseph, George, Nora, Wesley, Suzie and Izayaha, nieces and nephews. She is predeceased by her son in law Warren Kozlowski, brother Roland Gilbert and sisters Rachel Martel and Loretta Gilbert.
Born in Laconia, NH, she was the daughter of Delphis and Anna (Lessard) Gilbert and lived in Brookfield, and Rochdale most of her life before returning to Worcester in 1990.
Germaine was a cloth inspector for the former Carelton Woolen Mills in Rochdale for 20 years, retiring in 1979. She was a former member of St. Aloysius Parish and Blessed Sacrament Parish in Worcester. She was a member of the Knights of Columbus - Women's Auxillary in Leicester. The family would like to thank the staff at the Lutheran Home for their compassionate care over the years.

The funeral will be held on Tuesday, Jan. 3 from the MORIN FUNERAL HOME, 1131 Main St., Leicester with a Funeral Mass at 10 a.m. in St. Aloysius-St. Jude Church, 489 Pleasant St., Leicester. Burial will follow in Worcester County Memorial Park, Paxton. A calling hour from 8:30 to 9:30 a.m. on Tuesday will be held in the funeral home. In lieu of flowers, contributions may be made to either the Lutheran Home Patient Activity Account, 26 Harvard St., Worcester, 01609 or St. Jude's Children's Hospital, 501 St. Jude Pl., Memphis, Tenn., 38105.