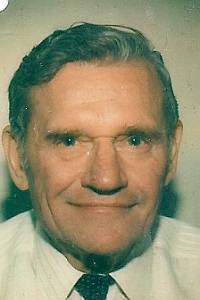 WORCESTER__Edmond Walter Palilunas, 91, of Worcester, died Wednesday, December 28, 2016 in Beaumont Skilled Nursing and Rehab, Northbridge. He leaves a niece, Carol A Douaire of South Grafton; a nephew, William C. Palilunas of Worcester and great nieces and nephews. He was predeceased by a brother Casimir “Casey” Palilunas. Edmond was born in Worcester, a son of Charles and Anna (Tamulionis) Paliluinas and lived here all his life.
Mr. Palilunas worked as radio technician-aircraft engine mechanic for the former Eastern Airlines. Prior to that he worked in the flight test center of General Electric in Schenectady, NY. He was a civil pilot. Edmond was a member of the former St. Casimir Church and past president of its Men’s Club, a member of the Church council, and an usher. He was a member and past president of the Lithuanian Social Club. Mr. Palilunas served in the US Army during World War II serving in Europe. He received two bronze stars for his service. He was a graduate of Worcester Boy’s Trade High School and California Flyers School of Aeronautics and Ceal-flyers School of Aeronautics.
The funeral will be held Tuesday, January 3, 2017, from DIRSA-MORIN FUNERAL HOME, 298 Grafton St., with a Mass at 11:00 a.m. in Our Lady of Lourdes Church, 1290 Grafton St. Burial will be in Notre Dame Cemetery. Calling hours in the funeral home will be on Tuesday, January 3, 2017 from 9:00 a.m. to 10:30a.m. In lieu of flowers, memorial contributions may be made to Sisters of the Immaculate Conception of Mary, 600 Liberty Highway, Putnam, CT 06260-2503. www.worcesterfuneral.com