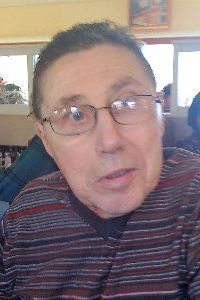 Mr. Lonchiadis was a maintenance worker at the Seabury Heights Apartment Complex for several years. He was a graduate of North High School, class of 1967 and attended Quinsigamond Community College. He is a veteran of the U.S. Air Force.
Boris was very active in his community. He coached hockey, as well as played as a goalie, for several years. He also coached for two and half decades molding young minds at Ted Williams Little League in Worcester and also coached football for several years after that. Boris lived for his family. A good man in every sense of the term, he would help anyone in need if he could in any way. He adopted William and Charles after marrying their mother, Emma Parent. He raised them as his own. He never treated them as adopted and we were all brothers, not half brothers.

He was active in the community until a severe stroke left him disabled in 2008. He then lived with his mother, Irene Humiston, until she passed in November of 2012 at which time he took up residence at The Lutheran Home where they cared for him like family. We are forever indebted to them for their care of Boris.

Not enough can be said about the numerous lives he touched and enriched during his time with us. He will be sorely missed by many people and the world is a lesser place without him.

Calling hours for Boris will be held on Tuesday December 27, 2016 from 5:00 to 7:00 P.M. in HENRY-DIRSA FUNERAL HOME, 33 Ward St. The private funeral will be held on Wednesday December 28, 2016. Burial will be in Hope Cemetery. Flowers may be sent or memorial contributions may be made to Lutheran Rehab & Skilled Care Center, Activities Department, 26 Harvard St., Worcester, 01609. The funds will be used to entertain and enrich the lives of the other residents.