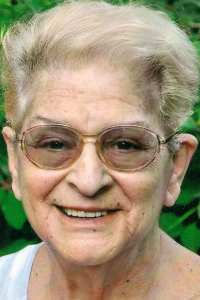 Her husband, Ralph J. Dellefemine died in 1994. She leaves two children, Lori A. and her husband, Travis S. Rotti of West Boylston with whom she resided and Ralph J. Dellefemine, Jr. of Fitchburg; three grandchildren, Nicholas, Michelle and Abigail; three great-grandchildren; a step-son, John and his wife, Gail DeSoto and their daughter, Audrey of Nevada; a sister, Stella Tiscoine of Worcester; a brother, Peter Haroutian of Worcester and nieces and nephews. Four sisters, Mary, Violet, Rose and Florence and a baby brother, predeceased her. She was born in Worcester, daughter of Tateos and Mary (Sisoian) Haroutian and graduated from Commerce High School.

Shirley was a loving and devoted mother and grandmother and will be deeply missed by her family.

A Celebration of Life will be held at a later date. Arrangements are in the care of FAY BROTHERS Funeral Home, 1 West Boylston Street.