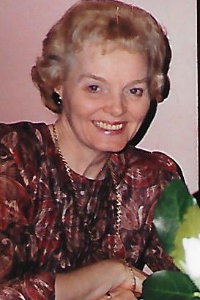 Holden - Elizabeth A. (Rainsford) Swenson, 82, died at the Rose Monahan Hospice Home on Friday, December 9, 2016. Betty was the widow of Raymond A. Swenson, who preceded her in death in 2006. She was born in Worcester, daughter of Albert and Ellen M. (Betteridge) Rainsford and was a graduate of Girls Trade School. Betty was a member of Trinity Lutheran Church. She was an office worker at General Electric and Assumption College in Worcester. She is survived by several cousins - Ken, Bob, and Shirley Wagner, Russel and Arlene Betteridge, Shirley Woods, and Norma LaMarche, Betty's caretaker during her years of declining health. Many thanks to friends who helped care for her - John & Joan McKiernan, Michael & Betty Flanagan, Ron & Chizu Beck, and Peg Knowlton; those who ministered to her - Michael Butler and pastors Susan Nachtigal and Nathan Pipho.

To leave a message of condolence in the online guestbook, please click link above.